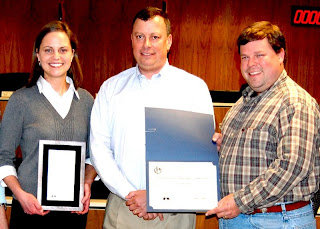 Milton receives Certificate of Achievement for Excellence in Financial Reporting.

MILTON, Ga., Nov. 4, 2011 - The City of Milton and its Finance Department have again been recognized for excellence, this time in producing the Fiscal Year 2010 Comprehensive Annual Financial Report (CAFR).

For the third year in a row, the Government Finance Officers Association of the United States and Canada (GFOA) has awarded the City of Milton the Certificate of Achievement for Excellence in Financial Reporting. It is the highest form of recognition in the area of governmental accounting and financial reporting, said the Chicago-based GFOA.

In addition, the city's Finance Department again received an award recognizing Financial Reporting Achievement. This award is given to the department or agency designated by the honored government as primarily responsible for preparing the award-winning CAFR.

Attainment of both awards represents a significant accomplishment by a government and its management, and the fact that Milton has been recognized for the last three years highlights the tremendous amount of work and care that goes both into the CAFR and the city's financial reporting every day.

"These documents, which provide valuable insight into how the City of Milton uses taxpayer dollars responsibly and frugally, are of utmost importance to our residents and business owners concerned with how their government is being run," said Stacey Inglis, Milton's Director of Finance. "Again receiving this prestigious award is a testament to the commitment and professionalism of everyone in the department, and the city government as a whole."
Inglis said producing the CAFR - which includes a yearly extensive audit, exhaustive research of historical data and numerous detailed written documents - was a months-long process involving every city department. Next year's document is already being prepared.


"We're very lucky in Milton," said the finance director. "We're seeing the first positive financial impacts of the recent Census in the form of an additional $680,000 annually in insurance premium tax funds, and that means we'll be able to do more for the community and report back every dollar we spend to our residents.
"We invite all of our citizens to explore the CAFR and understand fully the city's financial position."
Upon completion, the CAFR is judged by an impartial panel to meet the high standards of the program, including demonstrating a constructive "spirit of full disclosure" to clearly communicate its financial story and motivate potential users and groups to read the report.