What is the Only Source of Knowledge? 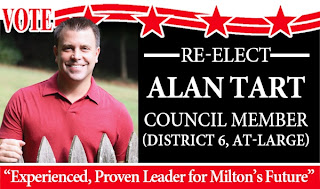 "The Only Source of Knowledge is Experience"

My first term in office has been marked by preparedness, honesty, integrity, and commitment. I have learned a tremendous amount about community planning and zoning, parks and recreation, public works, transportation, municipal law, budgeting, and council and city staff relationships. I have learned how to be more effective and respectful in a political environment where the views of my fellow elected officials may not be the same as mine or in sync with one another.

More importantly, I am very proud of the fact that I have accomplished everything I said I would accomplish four years ago. My proven experience and tested commitment to you, the citizens of Milton, will be vital as the city continues to move forward from where we began just five years ago.

The experience I have gained in my first term in office is evidenced by the following decisions and accomplishments that have made our city financially strong and able to provide a higher level of service than while under Fulton County:

Relative to Protecting the Quality of Life of Citizens.

Voted to approve a fiscally viable City of Milton 20-year Comprehensive Plan
Worked with staff to stand up the Milton’s Police and Citizens Together (MPACT) program designed to support neighborhood crime watch programs and serve as a reporting and information distribution system for crime
Consistently voted to approve additional fire fighters and police officers with each fiscal year budget (for instance, we added four police officers this year alone)
Co-sponsored a resolution to create a Highway 9 Design Guidelines Committee which later led to the adoption of enhanced design standards for future development in the Highway 9/Deerfield area. These will ultimately improve the look and feel of the area and make it more pedestrian-friendly.
Voted to accept the Crabapple Visioning Plan prepared by Lew Oliver, Inc. that will lay the foundation for traffic and infrastructure improvements, an enhanced "village" feel, and other pedestrian-friendly enhancements in the Crabapple area
Voted to approve height restrictions and enhanced buffer requirements along Highway 9 to ensure harmony between commercial and residential development
Voted to approve a joint Livable Centers Initiative (LCI) grant study with Alpharetta for improving the character, look, and feel of the Windward/Highway 9 corridors
Click here to hear my opponent speak about his support of the gas station at Highway 9 and Bethany Bend and the developer’s subsequent donation to his campaign. Please note - I did not support this application.
Relative to Ensuring Fiscal Responsibility and the City’s Financial Viability and Strength

Click here to read an article in this month’s issue of Georgia Trend that discusses Milton’s strong financial position.

Voted to approve growth and development that met our land use plan, zoning ordinance, and design standards
Voted to terminate the services of CH2M Hill and transition most city services to a more traditional style of government – a move that saved the city $1,250,000 in 2010, another $1,000,000 in 2011, and an estimated $1,000,000 every year thereafter
Voted to approve FOUR balanced fiscal years budgets that -
Enhanced services and the quality of life of our citizens and businesses
Retained a professional, highly competent city staff
Funded additional police and firefighters, as well as essential equipment and training, that has drastically reduced response time and level of service
Repaired bridges
Has resulted in a $7,800,000 fund balance (i.e. reserves) as of FY '11. This is 2.5 times more than is what is required by the state which is allowing us to use $1,300,000 in 2012 for additional paving and intersection improvment at Hopewell/Cogburn/Francis
Supported the development of a Five Year Capital Improvement Plan, detailed each year in our budget, that fully funds our roads, bridges, intersection improvements, city planning

Relative to Supporting Parks and Recreation

Voted to approve a Transportation Master Plan that lays the foundation for needed intersection and road improvements and vehicular patterns in and around our city
Approved Five Year Capital Plan, detailed each year in our budget, that provides $2,000,000 for road paving in 2012 and $2,200,000 in subsequent years (fully funded based on pavement plan)
Approved multi-year funding and intersection improvements in progress at the following intersections:
o Arnold Mill/140 and New Providence

Relative to Protecting Our Environment and Historic Assets

Voted for the adoption of a new Tree Preservation Ordinance that applies to both homeowners and developers and is designed to not only protect existing trees, but to encourage the planting of more native tree species as well
Voted to approve the adoption of a Historical Preservation Ordinance and supported the creation of a Historic Preservation Commission
Supported the purchase of the historic Hopewell House (built between 1805 and 1830) which will ultimately generate revenue for the city

I want to put my proven leadership and experience to work for you in my next term. Make no mistake about it, this is an extremely important election for Milton. I ask for your support in my re-election bid and your vote on November 8.

Watch excerpts from the Milton Peoples Forum sponsored by the Milton Herald and AccessMilton.com that was held on Tuesday, 10/18. Compliments of Patch.com. =>
http://alpharetta.patch.com/articles/milton-distirct-6-candidates-push-experience-on-city-council-vs-real-world-experience#video-8162590

North Fulton County Annex, 7741 Roswell Road, NE, Suite 232, Sandy Springs
Downtown at the Fulton County Government Center, 130 Peachtree St., SW, Suite 2186, Atlanta
Absentee Voting: If you will be out of town on Election Day, November 8, and are unable to vote early, there is still time to request an absentee ballot and vote by mail. You can print an absentee ballot application by clicking HERE=>
http://sos.georgia.gov/elections/elections/voter_information/absentee_ballot_app.pdf

Call to Action - How You Can Help

This is what you can do to ensure our success on Nov 8:
Donate
Display a yard sign - Order now!
Host a meet and greet or fundraiser
Volunteer to be part of the Friends of Alan Tart campaign team
Please let me know how you can help and feel free to contact me with any questions or issues you may have. Thanks again for your support!

If I have to hear him say the word "relative" one more time...

If Alan Tart wasn't "related" to Julie Bailey so closely, he'd -and we'd- be better off.

Complete bunk. Go make your money developing in other cities.

Hopewell House will never generate revenue!!! Admission prices will not even cover the cost of maintenance, power, taxes, and insurance. Plus it needs about a $100 K of work done. Throw out these bums who spend our parks money studpidly!!!

Anything dumpy and rustic looks good to Julie.

Wasn't that decision unanimous? You've become so obsessed with Julie that you can't think straight.

Hopewell House was bought so far below market that it could be sold for a profit at any time.

You are blinded with some kind of weird hatred, obsession, whatever.

No way the house was built between 1805 and 1830. Thomas Byrd bought that Land Lot 403, 2nd dist. 2nd section, from Thomas Holcomb of Hall County 1n 1833 for $150. Holcomb was a drawer in the gold lottery of 1832. This council needs a history lessson and stop listening to recent previous owners!

Who is going to go and pay to walk through that house, it has no historical value other than it's old. Nothing important ever happened in that house related to Milton, nor did anyone in our history ever live there, so what was the real real reason for purchasing that property, any one know or want to elaborate? We've all been lied to ladies and gents. Someone figure it out.

The historic commission is Patti and Travis and a few others people, I think, or is it just the two of them. We hardly have anything historical here to validate even having a historical society. Squeaky wheel got it's oil after whining constantly about the so called "history" out here. Please list all the historical sights, not just old buildings, and tell us how those locations or buildings tie into the history of this city or this area? Enlighten us. One be more than a page if even that, using large font. It seems anything close to or older than 100 years is historical, which is ridiculous. Is that the criteria? Travis please list all the locations that are historical or share a link to the city where we can find it all. No digg on you Travis, so don't take it personal. It was the historical society correct who pushed the purchase of this house on Council, true or false?

HPC had no input in the purchase nor were they aware that it was even being considered. Check the council minutes if you want to to see who pushed it.

False...There is not yet a Milton Historic Society

The Historical Preservation Commission is seven people, not just myself and Patti. We were completely unaware of the city's intent to purchase this property until it was put on a council meeting agenda.

Our input was not and practically has not been requested before or since that time.

Technically nothing in the City of Milton has been declared historic, but my personal opinion is that we have a potential historic district in Crabapple given the age and character of some of the buildings near the main intersection.

Outside of Crabapple I'd say we have maybe 10-15 buildings with potential to be eventually declared historic.

Make nasty uneducated comments as you see fit, but most of us know quite a bit more about the history of the area than you do. Not bragging, just the truth.

If you don't think we need a historical society, then don't worry about it, nobody will twist your arm to join it once formed.

The criteria is not limited to just age, but also to several other factors, including significance, so if you're asking about the "Hopewell House" then it's not only old, but possibly the oldest house in Milton, so how could it not have historical value.