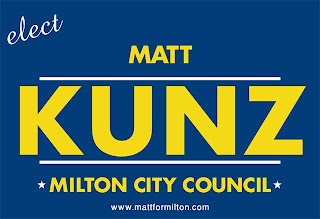 
As a Financial Advisor I spend my days looking at numbers. It is my job to see both opportunities and challenges before they occur. I did the same thing before I decided to run for the District 2 seat held by my opponent, Mrs. Zahner Bailey. I would like to share a few numbers that jumped out to me.

2. Milton is the second wealthiest city in Georgia. Even in the face of the global economic downturn, Milton has more resources than any other city in Georgia, except 1.

86. That's the percent of Milton's revenues that come from homeowners. This is higher than ANY other North Fulton city. Looked at another way, our government is funded by individuals like you and me. My opponent said that she believes this is sustainable. Nearly every city planning organization says otherwise, including the Livable Communities Initiative that is consulting the city.

18. The City of Milton's budget for this fiscal year is $18 million.

7. That's how many millions of dollars Alpharetta will have as a surplus next year. Their surplus is equal to nearly 40% of our budget!

0. We have no public football, soccer or lacrosse fields in Milton.

0. We do not have any adaptive parks

0. The number of major adjustments we can make with our current revenue


My opponent says this is fine. I disagree. This campaign is about generating revenue from some place other than you and me. This is about lowering our tax burden. This is about sidewalks, parks, recreational facilities, thriving communities and one making one great city, our city, even better.

8. The number of days until the election.

1. The number of votes I need from every voter in your home to win this election and help turn things around.

You can also vote by way of an Absentee Ballot.

100: Percent that you are in the pocket of special interests that want to "buy" access to our special and unique city.

1: Days that you will be in office before you are paying-back the outside developers that financed your campaign

4: Or more residences that you would like to see built on each acre of land in Milton

76: Signs in each person's yard that you fool into supporting your campaign

0: Times that you have promised to defend the culture and low-density lifestyle of Milton

0: Times that you have told the truth about your intentions

Nonsense. Sadly, he is enthusiastically reading back talking points given to him by his paid political consultant and financial backers. He is lost and doesn't even know it. Its becoming obvious, even to people that aren't paying attention.

• 20+ years of volunteering and service to the City of Milton
• 500+ times appearing before Fulton County to defend what is now a unique and valued way of life we call Milton
• 5 years serving you and your family in a way that has created a premiere place to live, work and play
• $7.8 million...the fund balance Julie helped create through conservative management of our city's budget and resources
• 15+ years working as a senior executive in major financial organizations responsibly managing budgets and financial models

Now tell me who can run their campaign by the numbers???

Matt. If you publicly promise to fire every department head from city manager down and only hire people who live in the city, I'll vote for you.

What is up with this guy's name? Did they change it to that because they thought it was funny, or aren't smart enough to change from it?

Sounds like Julie is over qualified for the position and maybe should go back to the corporate world, although her reputation from that is the same as it is now, "nut job"!

Highly effective their too. Last poster is hoping to make a buck.