Milton Peoples Forum is Tonight and Early Voting Has Begun. 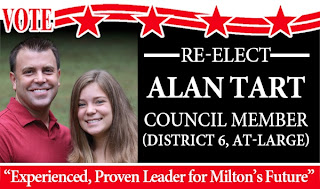 A Proven, Unbiased and Unwavering Leader

I believe, as the majority of citizens do, that Milton, with conveniences of a quiet Atlanta suburb but a unique, rural, small town, equestrian character, is a real gem in the State of Georgia. That’s why my family moved to Milton and why I have been involved in keeping my community a great place since moving here. Other cities like Alpharetta and Roswell, even Sandy Springs, once possessed the same attributes as Milton, but as the City of Atlanta grew, the uniqueness of these cities also diminished. I don’t want that to happen to Milton.

Milton needs elected officials, like me, who have PROVEN to be unbiased and unwavering in their commitment to ensuring Milton’s long term vision is realized and who can leverage their experience to enhance the quality of life of our current citizens and future generations.

Milton also needs PROVEN fiscal conservatives at the helm. I have a four year track record of fiscal conservative governance. Due in part to the decisions I have made during my first term, the city's financial outlook is positive - both in the short and long term.

Learn more about my accomplishments during my first term=>
http://www.campaignwindow.com/alantart4milton/

As we approach the five year mark as a city, Milton’s citizens want their government to remain lean, fiscally conservative, and financially viable in the short and long-term. They also want fully staffed and equipped police and fire departments with rapid response time, more parks and recreational fields, and safer roads and intersections.

As a citizen, father, and community leader, I agree that these are essential quality of life issues. So, just as I followed through on each and every commitment I made during my first term, I commit that I will fight hard to ensure that the following quality of life issues are accomplished in my second term:

· Our parks will be developed,

· Recreational opportunities will be numerous,

· Our police and fire departments will be fully staffed,

· Our roads will be improved, and

· Our most dangerous intersections will be safe.

We can do all this while maintaining a lean, fiscally conservative government, without having to compromise our way of life or rural, equestrian character, and without having to throw our more commercial areas like Highway 9 and Crabapple "to the wolves" and endangering the quality of life of citizens who live in those areas at the expense of other parts of the city.

Learn more about my priorities and commitments during my next term here=>
http://campaignwindow.com/alantart4milton/more/index.cfm?Fuseaction=more_57340

I ask for your vote on November 8. The experience I have gained as your council member these past four years and my track record of objective and unbiased decision making will be vital to Milton's success as we continue to progress as a young city.

Please consider donating, displaying a yard sign or car magnet, wearing a campaign t-shirt, endorsing me, and/or volunteering in some capacity. Remember that all district city council positions in Milton are at-large, meaning all citizens, regardless of the district in which they live, vote for every district position. Your individual vote DOES matter in a city election!

It is an honor and privilege to serve you.

Donate
Display a yard sign - Order now!
Host a meet and greet or fundraiser
Volunteer to be part of the Friends of Alan Tart campaign team
Please let me know how you can help and feel free to contact me with any questions or issues you may have. Thanks again for your support!