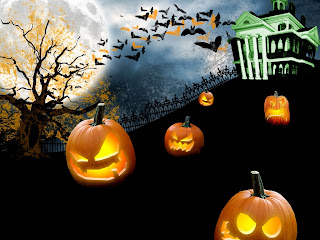 THE ORIGIN OF HALLOWEEN

Halloween's roots can be traced back to Celtic culture in Ireland. According to their "Druid" religion, November 1st was New Years' on their calendar. The celebration would begin on October 31st ,and last into the following day. The spirits of all who died in the prior year, would rise up and roam the earth on this night.

This is an evil night when spirits roamed the streets and villages. Lord Samhain, the lord of Darkness, would arrive in search of the spirits to take them to the underworld.

Halloween as it is currently celebrated with costumes, trick or treat, and superstitions, takes from this Druid Holiday.

Halloween was commonly referred to as "All Hollows" Eve. It originated from the pagan holiday honoring the dead. The Roman Catholic Church created All Saints Day (also called Hallomas) on November 1st to honor Saints and All Souls Day on November 2and to honor and pray for the souls of the dead. These holidays were created by the church, in part to downplay the pagan holidays. Needless to say, it did not succeed. Halloween as we know it today, has grown from the ancient Druid Holiday. Along the way both fun, frights, and Satanic twists have been added to the mix.

Halloween is second only to Christmas in spending. Consumers spend over $2.5 Billion during Halloween. That's a whole lot of candy, costumes, decorations, and party goods.

SAMHAIN THE LORD OF DARKNESS

The Druid religion of Celtic tribes worshipped Samhain, the Lord of Darkness. The Druid New Year began on November 1st, as the hours of nighttime were growing significantly over the hours of sunlight. Hence, Lord Samhain reigned over the long winter months as the influence of the Sun god receded.

Pumpkins have inhabited the planet for thousands of years. They originated in Central America. They were used then (and now) as a food crop. Over the course of centuries, pumpkins spread their vines across all of North and South America. When Europeans arrived in the New World, they found pumpkins plentiful and used in cooking by Native Americans. They took seeds back to Europe where they quickly became popular.

Did you Know? There are no words in the dictionary that rhyme with orange? Hard to believe for such an important color? The same is true for the colors purple and silver. But, who cares about silver and purple...they are not pumpkin colors!

Growing big pumpkins is a big time hobby. And, serious at that. Top prize money for the biggest giant pumpkin is as much as $25,000 dollars at fall festivals. The current world record for giant pumpkins is 1446 pounds. Now that's a lot of pumpkin pies!

Carving pumpkins is a traditional and fun part of Halloween. You can carve simple designs or intricate patterns.

The Irish carved Turnips and put coals or small candles inside. They were placed outside their homes on All Hallow's Eve to ward off evil spirits. They were also known to use potatoes and Rutabagas.

When Irish Immigrants came to America, they quickly discovered that Jack O'Lanterns were much easier to carve out and began using them. This truly neat tradition quickly spread to the general population in America and elsewhere.

It is believed that the Irish began the tradition of Trick or Treating. In preparation for All Hallow's Eve, Irish townsfolk would visit neighbors and ask for contributions of food for a feast in the town.