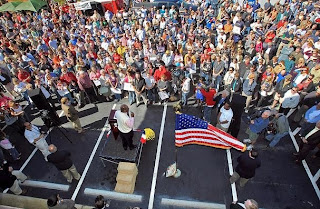 More than a thousand supporters turned out to see GOP presidential candidate Herman Cain in Milton on Sunday.

By Tammy Joyner
The Atlanta Journal-Constitution

In the last two weeks, Herman Cain has traded jokes with Jay Leno in California, outdistanced the GOP frontrunners in Florida and made the rounds of national Sunday morning talk shows.

But Sunday afternoon, the McDonough resident was back home in metro Atlanta with some 1,200 supporters wrapped around the Olde Blind Dog Irish pub in Milton. Some waited more than four hours to hear him speak and get a signed copy of his latest book, "This is Herman Cain! My Journey to the White House.”

Roswell resident David Batts, who was first in line, said he has been following Cain since his days as a radio talk host. "He's the embodiment of the American Dream."
Mike Farthing, who also waited more than four hours, said he and Cain see eye-to-eye. "He says what I'm thinking. He reminds me of my grandfather. He's always giving grandfatherly advice."
Until a few weeks ago Cain's advice -- smaller government, a complete retooling of the tax code, personal responsibility and a return to the essence of the U.S. Constitution -- drew little attention. Now people can't seem to get enough.

Even Cain seemed pleasantly surprised by his recent run, especially his showing in the Florida straw poll.

"We thought we'd do well," he told the cheering crowd in a 15-minute speech outside the pub, one of several metro Atlanta appearances he was set to make Sunday. "But we did not know we were going to blow away the competition! That straw poll was a game-changer. Gov. (Mitt) Romney and Gov. (Rick) Perry spent a considerable amount of money to influence that poll. We rented a bus and went throughout the state talking to people."
Whether 1600 Pennsylvania Avenue becomes his next address, Cain's life story reads like a tale of Horatio Alger, an award he won in 1996.

Raised in Atlanta, Cain's father chauffeured Coca-Cola President Robert Woodruff. Unable to attend the University of Georgia because he was black, Cain's family paid for Morehouse College through stock received from Woodruff. The young Cain’s mathematical prowess earned him a math degree from Morehouse College. He followed that up with a master's in computer science from Purdue and after a stint in the Navy, he began an illustrious business career that included time at The Coca-Cola Co. and Pillsbury. While at Pillsbury, he took two struggling units -- Burger King and Godfather's Pizza -- and remade them into powerhouses within their own sectors. He served as chairman of the Federal Reserve Bank of Kansas City during the mid-1990s. Around that same time, Cain became a senior advisor to the Dole-Kemp presidential campaign. He's a stage four liver and colon cancer survivor.

Cain's ability to listen to everyday people as well as overcome personal and business challenges have drawn people like Dunwoody resident Mary Wargula and her daughter Megan of Woodstock. Megan and her husband have struggled to overcome some economic challenges of their own in the last year. She told Cain as he signed his book for her : "Tell Obama about the underemployed." To which Cain replied: "I will. There's a lot of them."
His gift of gab has earned him a following as a radio host and has likely served him well as a minister. It's also gotten him into trouble. But he is gaining more support along the way.

"People like what he’s saying," said veteran Republican strategist Tom Perdue. "He’s recovered from his earlier fumbles and now it's going to simply be a matter of whether he can turn this into fundraising both short-term and long -term. If he can, he's a serious candidate."