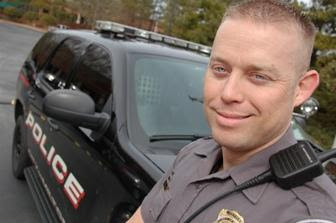 Headed by 11-year police veteran Andrew Phillips, the only officer in Georgia to have been awarded the Department of Justice's National Medal of Valor, the program is designed to connect Milton residents to their police professionals in a variety of ways.

Phillips said homeowners' associations, parent teacher organizations, professional groups, Boy and Girl Scout Troops, and more are welcome to contact him to request a police presence or training for matters important to them.

He is available by calling 678-242-2505 or e-mailing andrew.phillips@cityofmiltonga.us. There is also an online form for residents looking to schedule a meeting with Phillips available at the city's Web site, www.cityofmiltonga.us. Residents may sign up by clicking on "Forms," then choosing "Police Department Community Outreach Program" under "Online Forms."

It is also available here.

"Now with the City of Milton's Police Department being well established, citizens can expect more from their police department than basic 911 services," said Phillips.

For instance, if a homeowners' association would like to start a Neighborhood Watch Program, Phillips would meet with representatives and introduce them to Milton Police and Citizens Together (MPACT). He would then assign the neighborhood an officer who would be their point of contact and provide Neighborhood Watch signage.

"With Milton's population being near 30,000, we simply don't have enough officers for direct, one-on-one contact with each individual citizen," he said. "Programs like MPACT provide a more personal forum for contact between groups of citizens and officers."

Each officer will have only a few neighborhoods under his or her purview, said Phillips.

"Those officers can then be a resource for the residents, able to provide relevant training and general information to suit the specific needs of that community," he said. Phillips said in April he will launch a 10-week Citizens Police Academy that will meet one night a week. Also in the works are rape awareness and defense classes, training in and partnerships with the Georgia Child Identification Program (GACHIP), child safety seat demonstrations, and more.

Beginning his law enforcement career with the Marietta Police Department in 1999, Andrew Phillips has served in the Uniform Patrol Division, on SWAT teams and in narcotics and drug-related investigations, including undercover work. During his career, Phillips has garnered some 15 separate commendations for his police work, including having Aug. 10, 2005 named "Officer Andrew Phillips Day" in Marietta. That designation was due to Phillips attaining the National Medal of Valor from the Department of Justice, an honor given to him by Vice President Dick Cheney and Attorney General Alberto Gonzales.