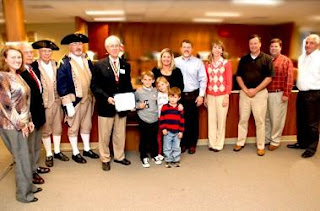 French, center, is pictured with his family, the Milton City Council, and the Sons of the American Revolution, Piedmont Chapter.

Milton’s City Council, in conjunction with the Sons of the American Revolution, Piedmont Chapter, honored Milton 6-year-old JC French at the Nov. 1 City Council meeting with a proclamation naming the day in his honor.
French was on vacation in Florida over Labor Day weekend with his parents and friends when he heard a man calling for help in the ocean. French, who was with his mother on a sandbar they had reached by kayak, threw a life preserver some 50 feet to the struggling swimmer, saving his life.
News of the rescue reached a local Florida newspaper, then Milton Councilman Bill Lusk, who helped set up the event.
As part of the evening, French and his parents spoke with local television and newspaper reporters about the rescue.
Posted by Accessmilton Admin at Wednesday, November 03, 2010