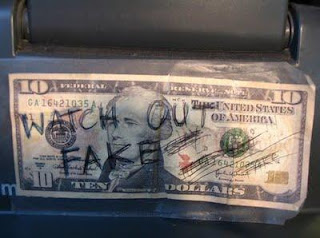 By Andria Simmons
The Atlanta Journal-Constitution
A woman brought a $10 bill to the Milton Police Department last week after she realized that it was a fake.
She told police that she had traveled to Biloxi, Miss., in recent days and visited multiple gas stations and stores during that time.
She could not be sure where she picked up the funny money, according to a police report. She reportedly discovered the bill was fake when she attempted to use it at a Zaxby's restaurant.
Posted by Accessmilton Admin at Wednesday, November 17, 2010