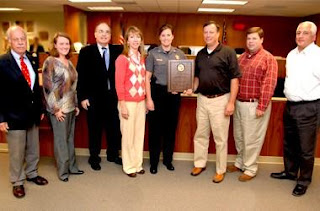 The City of Milton Police Department, which received State Certification from the Georgia Association of Chiefs of Police (GACP) in early August, received its award at the Nov. 1 City Council meeting.

Milton Police Chief Deborah Harrell received the award from the GACP’s Michael Caldwell, who said it represented the city making a huge effort to “keep its citizens safe.”

Less than 15 percent of the police agencies in Georgia earn the certification, which requires compliance with a set of policies covering eight distinct areas of law enforcement: the agency’s role; organization and management; personnel; legal; operations; support services; communications; and holding areas.

The Milton Police Department is now setting its sights on National Accreditation through the Commission for Accreditation for Law Enforcement Agencies (CALEA). This gold standard of international law enforcement includes on-site reviews of more than 450 standards in all areas of public safety service, including operations, management, technical services and homeland security/critical incidents.