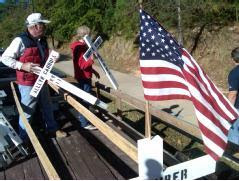 Councilman Makes Markers To Line Street
By Katie Brace, CBS Atlanta
MILTON -- Bill Lusk is a Milton City councilman and veteran who has created a memorable way of honoring the city's veterans.
Lusk makes markers that are placed in front of City Hall. There are 150 markers, each has the name of a veteran and when they served.
The families of the men and women honored on the markers provided their information to Lusk.
Lusk is a Vietnam veteran who served in the Navy's construction battalion. He began making the markers three years ago.
The markers were placed on Deerfield Parkway on Sunday Oct. 31 in preparation for Veterans Day.
Posted by Accessmilton Admin at Tuesday, November 02, 2010