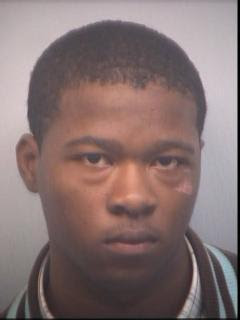 MILTON, Ga. -- A teen was arrested after robbing a Panera Bread shop on Thursday, Milton police said. His accomplice is still on the loose, police said.

An employee of the Winward Parkway store was leaving work through a side door that night when two armed men ambushed him, Milton police Capt. Shawn McCarty said.

One of the robbers, 18-year-old Barry Lawrence, of Forest Park, went to the kitchen and forced a female employee to the ground, McCarty said. Police said another employee managed to stay hidden behind an oven.

Meanwhile, Lawrence’s accomplice led the manager to the back of the store and made him open the store's safe, McCarty said. An employee just arriving to work saw his manager in distress and called 911, McCarty said.

The robbers fled the store, but didn’t get far, police said. An officer said he could saw the men running from the Panera Bread into the woods behind Hotel Sierra Alpharetta, where Lawrence was later found

Officers searched Lawrence and found one of the employees’ phones and several small bags of what appeared to be marijuana, McCarty said.

Lawrence was charged with two counts of armed robbery by force and six counts of aggravated assault with a firearm. He was taken to the Fulton County Jail. His first court appearance was scheduled for Saturday morning.

Police found clothing belonging to the suspects, money and a Panera Bread cash box in the area surrounding a nearby AT&T building, McCarty said. He said they are still searching for Lawrence’s accomplice.