Web Site Gives Milton A Forum for, Well, Anything. 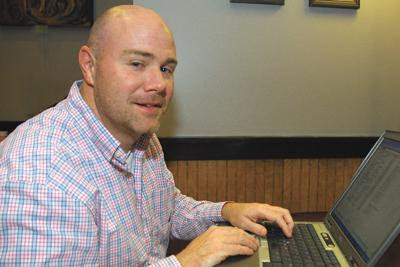 AccessMilton.com co-founder Tim Enloe is never far away from his computer.A web site devoted to the goings-on in the new city of Milton was designed as an Internet vision of Mayberry, where residents could talk about living amid horses and good places to buy a car.

Then came the nasty City Council elections. That turned the website, AccessMilton.com, into more of an Internet coliseum, where opponents flogged each other mercilessly.
Folks were waiting to see if the website’s post-election atmosphere would return to its homespun roots or resume its election posture, which was basically a text-message version of talk radio.
Co-owner Tim Enloe got his answer the other day after posting a lovely photo of a covered bridge and suggesting they’d be neat to have in Milton, “like the days of old.”
He received eight responses, most of them anonymous and most of them taking a dim view of the idea.“How quaint looking is a covered bridge that’s 24 feet tall,” wrote Anonymous, perhaps alluding to the city’s dislike for tall structures. “It would stop all truck traffic [including delivery of your new plasma flat screen] and deliverys (sic) to Publix, etc.” That drew an angry response from another visitor.“Thanks for all your negativity on the idea. That's real helpful. Guess we should all just move out of here since the city's going broke anyway.”
Just another day at AccessMilton, which Enloe developed to generate advertising revenue. So what if it occasionally feels like people throwing darts – at each other? At least they’re talking about Milton.
Enloe, whose background is in sales and the Internet, juggles three roles in his business life – selling real estate, working for a website that develops franchising and overseeing AccessMilton.
Enloe and business partner Scott Thompson recently expanded with AccessJohnsCreek.com and OurGeorgiaMountains.com. They also hold domains to develop Access sites for Alpharetta and Sandy Springs.
Their company, Magnolia Media, recently started a monthly newsletter. “It helps to keep the community abreast of various issues that people want to know about, from the very serious to the very laid back, like dog adoptions,” Enloe said.
The Milton site, which is just a year old, received its 100,000th hit way back in March.
AccessMilton.com was abuzz during the recent council elections, and the site correctly predicted the results, with an unscientific Internet poll indicating incumbent Julie Zahner Bailey and the two newcomers she favored would win easily.
The most recent question posted – Do you believe tax incentives should be given to Milton land owners in order to discourage them from subdividing their land? – shows a wide majority voting yes.
When Enloe dreamed up AccessMilton, there was little newspaper coverage in the area. The field was wide open for an information source. “The basic focus is to marry a community with businesses in an online open format,” Enloe said. But the reason for its creation was simpler.Two years ago, Thompson, the business associate, was looking to buy a car. He ended up having to go to South Georgia to find the model he wanted.“After he purchased the car, it turned out that right around the corner from him there was the same car for sale, and he didn’t know about it,” Enloe said. “I thought, ‘Wouldn’t it have been nice, like back in the days of a Andy Griffith-Mayberry feel, to have a site where you never know what you know until you look around the corner?’”
Enloe had been involved in e-commerce for awhile. Thompson is an expert in search optimization. It was a marriage made in Barron’s.
As far as local content goes, the pair didn’t need to look farther than Enloe, who grew up in the little town and is a walking history book about Milton.He can tell you what farm used to be where and pinpoint the location of a well-hidden waterfall that drops 100 feet into a granite cavern.
He can share suburban legends, too.“I had always heard as a boy the reason the east side of [Ga.] 400 built out quicker than the west side, that being Milton, was because of granite mines,” Enloe said. “Originally, they were planning on putting North Point Mall where the silos [on Crabapple Road] are. It’s harder to build in areas that are granite because you have to blast.”
He is also inspired to write essays about his Milton experiences. His recent tale, about the day in 1980 when a massive white bull named Whitey protected his herd by beating the stuffing out a young bull that came a-courting, was burned into his memory from a treehouse on the family property.
But the recent elections turned the nostalgic site into a political bullring. “I never thought it would be as politically charged as it has been,” Enloe said. “We agreed that AccessMilton has to be objective.”A couple of times, however, he has had to edit language.“There’s always a chance that kids could be clicking around,” Enloe said. “I want kids to be kids as long as [possible]. Vulgarity, unfortunately, makes kids grow up.”
Posted by Accessmilton Admin at Thursday, November 29, 2007

I saw you in the Beacon today. congrats to you and accessmilton.
The article was a good read.
JJ