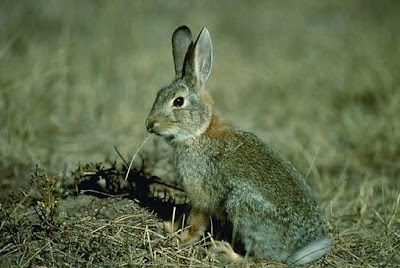 The eastern cottontail is the most common rabbit in Georgia occurring throughout the entire state. It has dense brown to gray fur on its back with a white underside and white or cotton tail. There is usually a white spot on its forehead, the nape of the neck is rusty in color, and the feet are whitish. From head to tail adults measure 14-17 inches and weigh 2-4 pounds.

Cottontails breed from February to September, with 80% of the young born from April to July. Males are polygamous (i.e., have more than one mate at a time). Cottontails are very productive having 3-7 litters per year that range from 4-7 young per litter. Their gestation period is 25-30 days. Young can start eating vegetation after 8 days and are weaned from their mother after 14 days.

The eastern cottontail is active mostly from dusk till dawn. Their annual home ranges cover 4-13 acres. Research has shown that cottontails use a variety of habitat types ranging from crop fields, oldfields, and pastures to briar and shrub thickets. Brush and briar thickets provide important cover from predators and mortality rates are greater when rabbits venture into open areas with sparse ground cover. Annual mortality rates average about 80% per year. Mammalian predators (coyotes, bobcats, foxes, etc.) account for the majority (55%) of cottontails mortality with avian predators (owls and hawks) next in line (25%) as a source of mortality. Most mortality of cottontails occurs during the breeding season.

Cottontails use a variety of habitats, but prefer early succession habitats (i.e., a mix of grasses, briars, forbs, and shrubs). Early succession habitat can be created or maintained by combinations of periodic ground disturbances that maintain ground vegetation in a 1-5 year old growth stage. Cottontails, as well as most rabbits, feed on a great variety of vegetation. However, rabbit management is targeted primarily at managing for quality cover and not food.
Posted by Accessmilton Admin at Friday, November 30, 2007