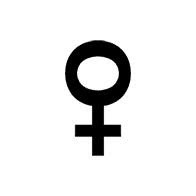 Before the year 1000, the word "she" did not exist in the English language. The singular female reference was the word "heo", which also was the plural of all genders. The word "she" appeared only in the 12th century, about 400 years after English began to take form. "She" probably derived from the Old English feminine "seo", the Viking word for feminine reference.

Thanks to www.didyouknow.org.
Posted by Accessmilton Admin at Wednesday, November 28, 2007