The following is information generated over the course of the past few weeks with the most recent being earlier today.

Evidence has pointed at the possibility that some Milton High School students are responsible. In reaching out to Principal Cliff Jones, he responded only saying
"Tim, Thanks for forwarding the information. I will remind the students to act appropriately outside of school.

We have emailed him back asking "in what way will you remind students? Also, I am sure you are aware of the vandalism your institution experienced within the last 24 hours. Please advise."-Stay tuned...

Regarding the school vandalism, here are some pictures. Eight to ten signs were run over on the Northwestern side of School Drive; the spray paint is on the gates leading into the High School. 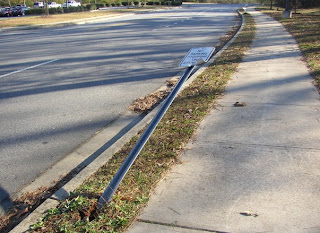 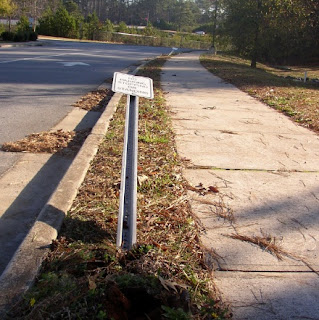 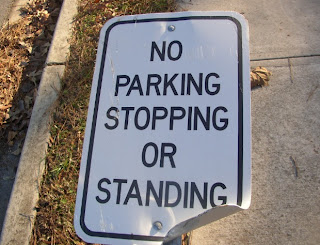 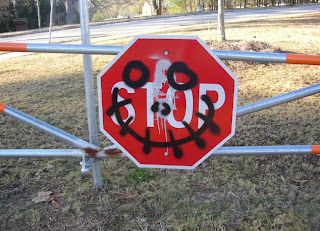 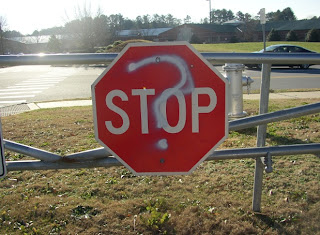 As Accessmilton.com readers know, however, these crimes against property are not exclusive. Here we have a speed limit sign that was flattened near the Providence Road / Birmingham Highway intersection=> 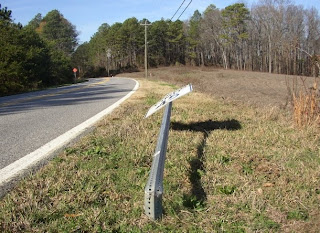 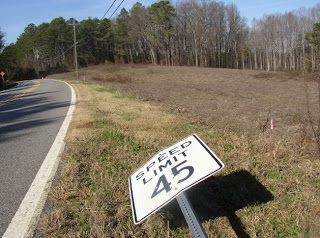 The primary victims of these acts have been families who reside in Milton's open road neighborhoods. Here we have a property off of Dorris Road that was damaged recently by a piece of pottery which was covered in profanity and had "Destination-Mailbox" listed on the bottom.(Address removed out of respect.) It is believed this item came from an art class at Milton High School. Not to be outdone, someone came by last night and flattened the entire mail box; post and all. This would be the fifth time this resident has had to address his mail box being vandalized. He has also had to spend quite a bit of money and time righting these wrongs. 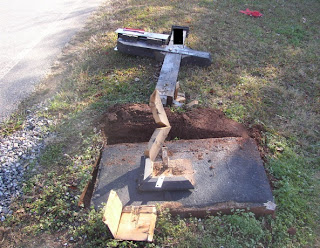 Not to be left out, Milton's subdivisions are now on the radar as well. Providence Lake Subdivision had both a speed limit sign taken out as well as subdivision billboard. Thankfully, evidence was left that will hopefully help our Milton Police Department find those responsible-fresh deep tire tracks. 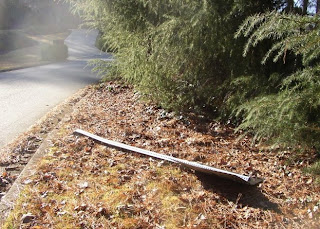 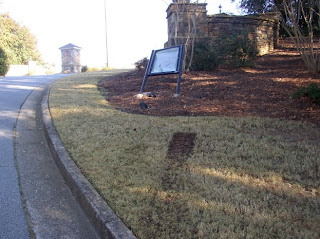 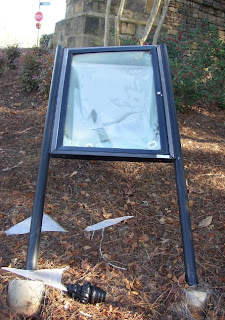 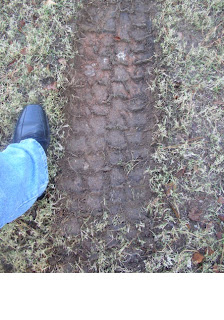 While these crimes of opportunity could still happen if Milton had hundreds of officers on duty each shift, it is simply a numbers game. The more visible police are, the less likelihood of crime. Thanks to Kathy Fies of The Milton Police Department, she not only sent Accessmilton.com the requested police reports, but also the amount of officers that have recently been on the road during the evening shift:

On 11-19-11 I responded to XXXXX Bethany Road, Milton, Georgia in reference to a damaged mailbox.

The mailbox was in pieces along the ground near Bethany Road. I found no tire marks or vehicle parts indicating a vehicle caused the damage.

Earlier this month, we broke this story thanks to one of Accessmilton.com's readers. At that time, we reached out to council, council elect, the police chief and city manager for input.

Unfortunately, the only person we heard from was Police Chief Deborah Harrell. She stated " Tim –Capt. McCarty is reviewing the damage reports to see what info we can direct to the officers for extra patrol in the area. "

Still, there as been no public announcment or input from the city. With that in mind and thousands of dollars of damage to date, we have sent another email to the same individuals asking if they would support offering a reward for information leading to those responsible. If and when we hear anything back, we will post it on Accessmilton.com.

We have also sent numerous pictures of the tire tract left at the Providence Lake scene to authorities.

Future information will be posted as recieved. In the mean time, keep your eyes and ears open and contact the Milton Police Department if need be.

While I think most likely it will be teenagers, and maybe from MHS....I have two teenagers who attend MHS, and were so completely aggravated and disgusted with the utter stupidity of the latest vandalism in and around Milton High School ....stupid is as stupid does...and these morons are most likely telling their their neanderthal friends what they did last weekend...
and if they are the same crew that sprayed the Roswell "R" on city signs around town,,,,keep looking

and if they are from MHS....make them liable for damages

You are right. By the way, where is our mayor, city manager and police chief? As usual, nowhere to be seen.

We have a police chief? Is it still Lagerbloom?