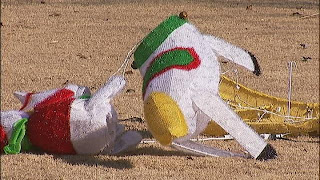 Vandals struck several houses in the Gates Mill subdivision in Milton. Residents take pride in their Christmas displays, but that pride turned to outrage.

"I had a Nativity scene set up with lights and everything and I saw that the baby Jesus was taken and thrown, tossed out to my driveway and damaged," Ken Tazza told Channel 2 Action News reporter Carl Willis. "And I saw that a statue of Mary was taken and tossed around."

Vandals left yards scattered with bent, broken and even beheaded Christmas decorations. Reindeer lights were knocked over, an inflatable Santa Claus was flattened.

Tazza said that wasn't even the worst of it.

"They even, I heard, took a Santa Claus and hung him from a tree, which was a terrible thing for children to have to see," he said.

Emails have been circling all day and neighbors have discovered that as many as five homes were hit.

"I don't know how much of this stuff is fixable, how much is beyond repair, but there's several hundred dollars worth of stuff," said Mark Vantassel.

Homeowners believe this was the work of local teenagers.

They said whoever's responsible needs to be taught a lesson in respect.

"It's not right," said Vantassel. "It's Christmas. It's for the kids, and to do this kind of stuff, it's just not right."
Posted by Accessmilton Admin at Sunday, December 11, 2011

Oh Steve, why don't you and Joe take time to reherse something other than "Give the guy a break."
All you want to do is throw jabs at Tim, yet what do you do for the community that is legal?