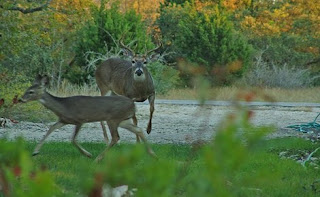 Reports have recently come in regarding numerous accidents between deer and automobiles in Milton. Most recently, a deer was hit and killed off of Redd Road with quite a bit of damage to the car.

For those unaware, the deer rutting or mating season is active from October through December in Georgia. Such action easily puts deer on higher activity and alert. Thus, they will run any direction at a moment's notice.

The following story by GA DNR should be of interest. Courtesy goes to http://www.georgiawildlife.com/ .

Avoid Deer on Road by Taking Extra Caution During this Time of Year.

With an estimated 50,000 deer-car collisions annually in Georgia, the Georgia Department of Natural Resources’ Wildlife Resources Division advises motorists across the state to be extra cautious of increased deer and wildlife sightings this fall season.

Increased deer sightings occur for a number of reasons – increased populations, habitat fragmentation and mating season are a few. With fall breeding season in full swing – a peak time of year for deer-related car collisions – the division offers motorists some tips and information to help avoid potential collisions.

“Some Georgia motorists may only expect deer to cross rural roadways, while in fact, urban and suburban roads are also prime areas for deer-car collisions,” explains Don McGowan, Wildlife Resources Division biologist. “Hunting is oftentimes mistakenly blamed for increased deer-car collisions in autumn when, in reality, deer are on the move due to a series of both natural and human causes.”
One such cause is mating season. Deer mating season occurs between October and early December. Male deer go into rut and begin actively searching for mates. This greatly contributes to the increased movement of deer, bringing them across roadways.

Increased human population and rural development also lend to increased deer sightings. As the human population continues to grow and expand into traditionally rural areas, deer lose their natural food source and consequently move into new areas in search of food and water.

Additionally, as we begin to “fall back” for daylight savings time, our days become shorter and nights become longer. Rush hour for most commuters tends to fall during the same hours in which white-tailed deer are most active – at dawn and dusk.

The division advises drivers of the following:

· Unpredictable: Always remember deer are wildlife and therefore, very unpredictable. A deer calmly standing on the side of a road may bolt into or across the road rather than away from it when startled by a vehicle.

· One Deer Usually Means More: Take caution and slow down when a deer crosses. Deer generally travel in groups, so if one crosses, be prepared that others may follow.

· Time of Day: As deer are most active at dawn and dusk, they typically are seen roadside during the early morning and late evening – the same times most people are commuting to and from work.

· Time of Year: While many deer-car collisions occur in early spring and late summer, when natural food sources are scarce, the fall breeding season is also a peak time for such accidents. Road shoulders generally provide green food both during extremely dry times of the year and following a long, hard winter.

· Minimize Damage: If it is too late to avoid a collision, drivers are advised to slow down as much as possible to minimize damage – resist the urge to swerve to avoid the deer, this may cause further damage, sending drivers off the road or causing a collision with another vehicle. If an accident occurs, alert the police as soon as possible.