A Quick Education on TB. 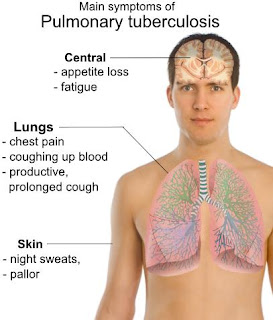 NOTE: With the recent case of tuberculosis at a local school, we thought the following information might be of interest to Accessmilton.com readers.

Tuberculosis or TB (short for tubercles

bacillus) is a common and often deadly infectious disease caused by various strains of mycobacteria, usually Mycobacterium tuberculosis in humans.[1] Tuberculosis usually attacks the lungs but can also affect other parts of the body. It is spread through the air when people who have the disease cough, sneeze, or spit.[2] Most infections in humans result in an asymptomatic, latent infection, and about one in ten latent infections eventually progresses to active disease, which, if left untreated, kills more than 50% of its victims.
The classic symptoms are a
chronic cough with blood-tinged sputum, fever, night sweats, and weight loss (the last giving rise to the formerly prevalent colloquial term "consumption"). Infection of other organs causes a wide range of symptoms. Diagnosis relies on radiology (commonly chest X-rays), a tuberculin skin test, blood tests, as well as microscopic examination and microbiological culture of bodily fluids. Treatment is difficult and requires long courses of multiple antibiotics. Contacts are also screened and treated if necessary. Antibiotic resistance is a growing problem in (extensively) multi-drug-resistant tuberculosis. Prevention relies on screening programs and vaccination, usually with Bacillus Calmette-Guérin vaccine.
One third of the world's population is thought to be infected with M. tuberculosis,[3][4] and new infections occur at a rate of about one per second.[5] The proportion of people who become sick with tuberculosis each year is stable or falling worldwide but, because of population growth, the absolute number of new cases is still increasing.[5] In 2007 there were an estimated 13.7 million chronic active cases, 9.3 million new cases, and 1.8 million deaths, mostly in developing countries.[6] In addition, more people in the developed world are contracting tuberculosis because their immune systems are compromised by immunosuppressive drugs, substance abuse, or AIDS. The distribution of tuberculosis is not uniform across the globe; about 80% of the population in many Asian and African countries test positive in tuberculin tests, while only 5-10% of the US population test positive.[1]

To find out more about this disease, please click here=>