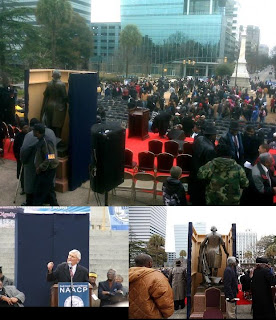 An organized rally — dubbed “King Day at the Dome” — protested the Confederate battle flag on display at the State House in Columbia and featured speakers and guests who called on government leaders to address “racial disparities” in education, health care, community development, criminal justice, employment and economic development in the state. But as a number of local and national speakers stepped forward to speak from the capitol steps, a large bronze statue of George Washington was conspicuously hidden (h/t Atlas Shrugs).

A large box covered with cloth hid the father of the country from view of the rally’s guests.

It‘s not clear why the NAACP insisted on covering up the likeness of the nation’s first president and a spokesman for the organization was not immediately available for comment.

Update: The South Carolina NAACP has responded to a request for comment and said the only reason the statue of Washington was covered up was for aesthetic purposes. “We had created a backdrop behind the speakers,” the group spokesman told The Blaze late Tuesday afternoon, noting that someone in his organization forgot to post an NAACP placard on the backdrop.

According to the group, the statue of Washington has been covered each year for the annual rally. The spokesman said he was “at a loss for words” as to why covering President Washington would offend anyone, claiming it was “non-sensical” for people to believe it may have been politically motivated.

If George Washington was black, would they have hid the statue and covered it up?