GDOT: 'Spend grant money or give it back' 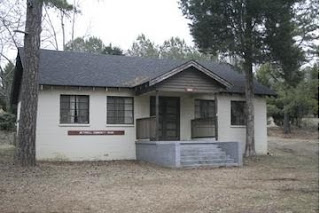 The Bethwell Community Center, located near the intersection of Francis Road and Hopewell Road, will be renovated to house summer camps this summer.

MILTON – The city of Milton has been informed it must either spend $500,000 in grant money or give it back to the Georgia Department of Transpo** The council approved drafting an emergency agreement for the purchase of land on Highway 9 at their Jan. 19 council meeting.

Public Works Director Carter Lucas informed City Council that the Crabapple Streetscape "TE" (Transportation Enhancement) Grant was allocated by GDOT for streetscape improvements to the Crabapple area. He was recently told that the city it has only two years to spend the grant, or they forfeit it.

"While that sounds like a long time, following through federal purchasing practices... that two years can go relatively quickly," Lucas said.

The city has been waiting to spend the money until several studies and plans were completed.

"Our concern is that if we begin projects without knowing the results of those two studies, we have the potential of installing project improvements that may be removed shortly thereafter as a result of those studies," said Lucas.

The options available to the city, as Lucas described them, were to move forward with spending the money in Crabapple, give it back or move it to projects on Highway 9.

Council member Karen Thurman suggested using some of the money on sidewalks throughout Crabapple, however Lucas warned that may be a waste of money if the plans they are waiting on call for other improvements in those areas.

The general consensus from council was to try and keep the money to projects within Crabapple.

** The council approved drafting an emergency agreement for the purchase of land on Highway 9 at their Jan. 19 council meeting.

According to City Manager Chris Lagerbloom, the proposal was necessary.

The city is currently trying to buy the five-acre piece of property located near the intersection of Bethany Bend and Highway 9. To get financing for the purchase, the city must put the deal out to bid to banks in the area. The only problem comes should Bank of America bid.

"Within 24 hours of them responding with their bid, the council must take action to agree to it," explained Lagerbloom. With the bids due Friday, Feb. 15, if Bank of America makes its bid and is the best choice for the financing, the council would not be able to act on it within the allotted time. So an emergency resolution was needed.

"If a different bank is selected, then this resolution is really just a formality," said Lagerbloom. "This is just a mechanism to make sure that we don't have one of those gotcha moments next Friday where we really want to accept their bid but we can't."

** More than $15,000 will be spent renovating the Bethwell Community Center, located at the corner of Francis Road and Hopewell Road.

According to Lagerbloom, the city was deeded the one-acre, prime piece of property to use as a community center. However, should it not be used for that, ownership would revert back to the previous owners.

Lagerbloom said that once the renovations are complete, in mid-year, the community center will be used for summer camps.

** The dugouts at Bell Memorial Park will be torn down and new ones built at a cost of $14,000. Currently, they are built of cinder blocks, which will be replaced with chain link fencing to make the players more visible.

How about spending the money to put stop lights and turn lanes on some of our dangerous and deadly intersections??? Such as Providence and Birmingham Highway! Hello, Council, anyone home?!!

I think the safety of our citizens and their families and those who travel our roads should be first priority!! Good one Karen, sidewalks in Crabapple, so they can be torn up later as that area is developed. I am wondering if the City would post the results of the survey for each question asked so we can see if Crabapple is actually where the citizens wanted a City Center. Tim how about getting that information for your readers.