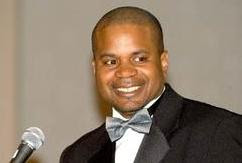 From Neal: There are no words available to express my personal sense of loss at the passing of Royal Marshall. It's no stretch to say that I loved that man like he was my own brother. Royal had an unmatched sense of humor and a quick mind that made him a natural for radio, and his dedication to his colleagues and friends was only exceeded by his intense dedication to his family. Our program, WSB Radio and the entire Cox family has lost part of its very soul this day. I ask that you keep Royal, his wife Annette and his two precious and much-loved little girls, Amira and Ava, in your prayers.

(WSB Radio) - Raymond Royal Marshall, producer of the Neal Boortz Radio Show, died suddenly at his Atlanta home early Saturday. He was 43. Marshall is survived by his wife Annette, and two daughters, Amira, 4 and Ava, 2.

Marshall collapsed at his home. Paramedics responded to his wife's call to 911, but were unable to revive him. He was pronounced dead early Saturday at Grady Hospital.

said Belinda Skelton, executive producer of the Neal Boortz Show. "My other half is gone. I don't know if I can sit and look at someone else on the other side of that glass."

Royal and Belinda interviewed at the station and were hired on the same day in 1996.

"Royal was an icon at WSB," said WSB Program Director Pete Spriggs. "I can't believe, frankly, that this is reality. He was a very, very, good man who was very passionate and committed to his wife and daughters, as well as his church and the community. You'll never hear a sharper wit than Royal's. The WSB family is devastated."

Marshall was also very active in his church and the community. He served as a deacon at the Ray of Hope Christian Church in Decatur.

He also served as chairman of the advisory board of Forever Family, an organization whose mission is to provide love and support to disadvantaged children.

Marshall was a military kid who, while born in St. Louis, Missouri, lived all over the world. He graduated from the University of Georgia in 1992 with a degree in speech communications.

The cause of death at this time remains unknown.