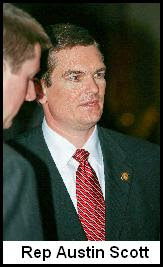 Six of eight candidates seeking the Republican nomination for governor appeared at a Roswell debate this week, sponsored by the Northside's mayors, where they attempted to tout tailor-made messages dear to many North Fulton GOP hearts, like local control.
Except Rep. Austin Scott (R-Tifton) – who poked a finger in Milton County's already red eye.
FULTON DIVORCE
Milton County was the very first question to come from the panel of mayors. Three candidates, former Sen. Eric Johnson, former Sec. of State Karen Handel and states' rights mantle-carrier Ray McBerry declared themselves strong supporters of what they see as government closer to the people.
But Scott broke ranks, and pointed out that Miltonites did not present a concrete plan -- such as how to set up school board terms or divide assets and debts with Fulton -- for their would-be county. For that reason, he said, he was cool toward the legislation this year that could have been the first step toward Milton-Fulton separation. When pressed, he said he would have voted "no" on Milton.
The newest entrant in the race, real estate magnate Ray Boyd, who just sunk $2 million of his money into his populist start-up candidacy, took the Fifth, saying he hadn't studied the issue closely enough to render an opinion. Bottom tier candidate, Sen. Jeff Chapman (R-Brunswick) showed up late and missed the question.
MONEY FOR MOVING
Handel and Scott both called for a project-specific reorganization at the Georgia Department of Transportation. Scott criticized GARVEE bonds – bonds sold just for unspecified "transportation" – to be replaced with project-specific bonds.
As for the additional penny sales tax Fulton might see under a massive transportation bill passed by the legislature this year, the candidates were asked point-blank what they'd do to remove that burden from Fulton.
Johnson pragmatically stated he would not fiddle with the bulk of the long-fought legislation: "It took three years to pass it. If you start to tinker with it, I'm afraid it will fall apart."
Indeed the years of negotiation, lobbying, hearings and research behind the legislation did not attract anyone to call for a repeal. Under the just passed bill, each of 12 Georgia regions will vote on taxing themselves for a set list of projects. The alternative was a statewide sales tax.
Scott and Chapman noted that they voted against the bill. "I agree it's not fair," said Johnson, "but we got what we got."
TEACHER PAY
On teacher pay, "we do need to move toward a more performance-based approach," said Handel, "but I think it's got to be based on more than just CRCT [standardized test] and certainly more than Adequate Yearly Progress," a measure created by the federal government.
"For example," Handel added, "you wouldn’t want to have a metric that disincentivizes a teacher to go to an underperforming school."
Johnson said he wants tax credits so the money can follow the student to the best fitted place in a full matrix of public, private, secular, religious, professional or vocational schools.
"Individualized education will be the civil rights struggle of the 21st century," he predicted.
Scott, whose own children go to public school opined, "If you think we can elect a Republican candidate who's not for public education, I respectfully submit that you're wrong."
Handel, Johnson and Scott all support making charter schools easier to form.
ETHICS
Chapman jabbed Johnson as soon as he got the chance.
"Georgia needs a governor who will not ignore the ethics crisis we're suffering," he declared. It's a problem "when a power utility company can come into the capitol and convince the General Assembly to allow them to bypass the Public Service Commission."
He was referring to a bill Johnson supported last to allow Georgia Power to get a rate increase to finance new nuclear plants.
Boyd, a Madison businessman, declared the need to clear out the nation's statehouses, but offered few policy details.
But, "I'm a quick study... by July 20, I'll know the budget as well as they do."
Boyd is expected to release details on his plan for sweeping reform of Georgia's government soon.
McBerry, running on a strict constitutionalist platform, suggested Georgia expropriate federal property, pointing out that seizing Lake Lanier from the Army Corps of Engineers would neatly solve the metro's water problem.
Posted by Accessmilton Admin at Sunday, April 25, 2010

Those candidates saying they are for a new Milton county are telling you what you want to hear. This approach is similar to ObamaCare, vote for it and we'll work out all the details later.

Same approach used by JJ and her cronies about city of Milton. How has that worked for you?