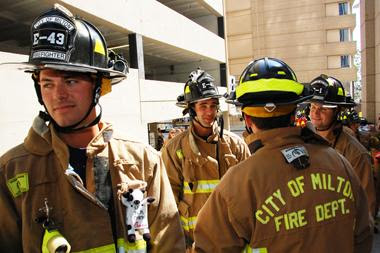 Team, personal results all second for Fight for Air Climb

The Milton Clydesdales placed second overall in fundraising and racing at the Fight for Air Climb 2010 April 17 at One Ninety One Peachtree tower in Atlanta.

But that wasn't all. Firefighter Thom Brown, last year's overall winner, placed second in a field of 111 individual racers. Fire Chief Robert Edgar also placed second out of 10 racers in his age group and 17th overall.

The grueling race required the firefighters climb the 1150 stairs in full turnout gear, which weighs more than 25 pounds and traps all body heat and moisture.

This year the Clydesdales raised more than $2,800 - nearly double their original goal. That put them in second for fundraising. With a team racing time of 58 minutes, the Clydesdales also placed second out of 11 fire departments participating.

To see a gallery of photos from the event, click here. To view the complete results, click here.

They should do a Milton Fire Department Calendar, and sell it to raise money for things they need! It would be huge success!

Tim can't you get this idea going for them, just find a local photographer to do the pics for free! Give your viewers on AM a preview to entice sales!

For the sake of single (and some married) women out here, get the ball rolling Tim!