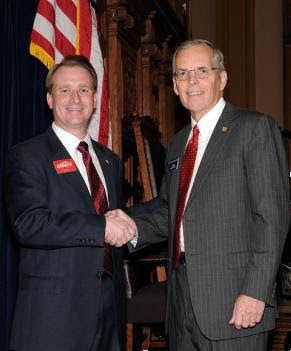 Praises His Strong Commitment to Serving Others.

(Roswell) – John Albers, the leading candidate for the Georgia State Senate for District 56, is proud to announce that retiring Senator Dan Moody, who has tirelessly and steadfastly served the people of North Fulton County in the State Senate for the last 8 years, has strongly endorsed John Albers to be his successor.

The announcement was made this morning at the North Fulton GOP breakfast at Horseshoe Bend Country Club.

Said Senator Moody, “I am extremely proud to endorse John Albers in the campaign to be our next State Senator. Serving in the Senate has been a great honor and it has reinforced my commitment to supporting leaders with a deep commitment to serving others over self. In both his professional and personal life, John has demonstrated a consistent commitment to serving others. He will truly be a “Customer Service” Senator who will serve the families of North Fulton faithfully and effectively.”

Albers thanked Moody for his service and his confidence. He then proceeded to tell the Senator of how much he would be missed. Said Albers, “My inspiration to run for this office and my model for how to lead effectively is Dan Moody. Dan has been a tireless advocate for all the people of North Fulton. I look forward to continuing his proud tradition of leadership and service.”

Moody’s endorsement comes on the heels of Albers impressive debate performances and continues the surge of grassroots support that John is receiving all across North Fulton. John has and will continue to be the candidate of choice, who has chosen to run on the issues and not false negative attacks.

For more information or questions, please contact the campaign at

NOTE: Accessmilton.com encourages all candidates running for office both locally and state wide to share information with us on their campaigns. This type of information does not mean that Accessmilton.com is endorsing one candidate as opposed to another. Here, all are treated equally and with respect.