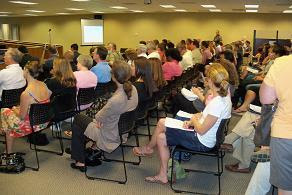 It took over an hour for the Milton City Council to weigh the issues regarding a proposed gas station on the acute-angled corner of Hwy. 9 and Bethany Bend, but faced with a parade of gas station opponents and tales of an exploding tanker truck, the council narrowly decided against the station.

A thunderous applause rolled through Milton City Hall Monday night as the three representatives for the Milton residents in attendance left the podium after a forceful presentation.

"Our property is only twenty-five feet from the gas station property...and downhill," stated Milton resident Bill Joseph. Pointing to the Power Point presentation, Joseph continued, "On the next slide, we see what can happen if, God forbid, there's an explosion at that site -- or a fire at the gas station. We know that that happens."

Joseph cited the terror of a fire and the explosion of a tanker truck dropping off a load of gasoline at a Nashville BP service station. He read the statement of a clerk who witnessed the blast: "I don't know where the fire came from. It was everywhere. Gas was shooting."

This was D Squared Development's second rezoning attempt before the city council. In March of this year, they presented their plan to develop a 2,100-square-foot convenience store and four pump islands (five pumps on the first go-round).

Twice denied by the Milton Planning Commission and once deferred by the city council, they made their stance known once more. With two experts and a lawyer at his side, property owner Medhi Jannatkhah stood against a room filled with angry residents.

"The community has asked a lot of questions about the fuel tanker. We get answers, but they do not alleviate our concerns. We're talking about a sixty-foot truck, that's roughly the length of a seventy-foot building ... carrying 20,000 gallons of gas maneuvering through tight spaces. The fact that there's only one way to enter and exit the site is extremely disconcerting," declared Milton resident Ashley Bowen.

And Heidi Souder, another resident, voiced additional grievances by citing the neighborhood live/work policy of Fulton County: "A development should be designed to be pedestrian-oriented and to promote walking and minimize conflict between pedestrians and vehicles." To her mind, this plan did none of these things.

After an hour of deliberation, Councilman Alan Tart finally motioned to deny the application and it was seconded by Councilman Joe Longoria. The motion passed 3-2 with Mayor Joe Lockwood and Councilman Burt Hewitt against the denial.

The Milton residents in the audience let out a collective sigh of relief after the vote. Jannatkhah and his entourage silently left the room. The battle was over. And the victors: the residents who surround this troubling intersection in the city of Milton.

And the same people will be back complaining when property taxes go up due to the lack of commercial development. There is more danger from the "hoods" in that neighborhood, than from tankers exploding.

It's not a busy crossroad, it's a statement of utterly poor urban planning. The intersection and its associated traffic management systems are worthy of a disaster-to-come study. The gas station proposal just highlighted the lack of focus on the real issues.

Highly-developed cities with commercial out the ying-yang have the highest taxes in the U.S. If you are basing your model for success on commercial development, it will not prove out.

The City made the right financial decision by not allowing this site to be developed as a gas station.

The viability of a gas station depends on vehicular access; this site has extremely poor access, so any gas station built on it would probably fail and never generate sustained commercial tax revenue.

Also, once the gas pumps were built, the site would be tainted; it would lose its potential for high quality commercial development and would likely remain a vacant gas station lot.

Turd Ferguson said...
This comment has been removed by a blog administrator.
5:41 AM

The quote about the fire and "the gas was comming from everywhere" is great. One councilwoman with the shrill voice's husband knows that feeling after she eats all that Costa Rican food.

She could make a jersey cow look like it is just letting out a little "poot".

Just wait, Karen is back and sucking up already.