Milton Police detail the effects of alcohol on drivers. 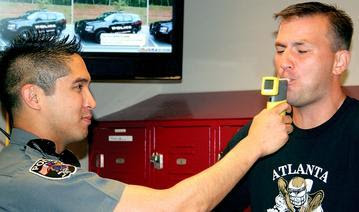 Milton officer Brian Kiel (right) takes one for the team by getting inebriated and attempting to pass sobriety tests for the Milton citizens police academy, administered by Officer Justin Wong. He failed.

MILTON – The Milton citizens police academy was both horrifying and hilarious as the students were subjected to images of car crashes due to alcohol or speed followed by tales of people doing everything they can to avoid being arrested for drunk driving.

Lt. John Borsey is Milton's accident reconstruction officer. So it's his duty whenever there's a violent vehicle accident to go to the scene and determine just what went happened in the moment before the crash.

"A fatal crash is not always due to speed," said Borsey.

The weight and type of vehicle and what it hits are major contributing factors. Luck is also needed to survive, often.

As a case-in-point, Borsey showed images of the fatal wreck of Milton teen Adam Stevens, who was killed several years ago, just before he was to graduate from high school. He and some friends had been drinking and sped off away from a police car. They lost control of the vehicle, left the roadway, hit a wooden telephone pole and then a metal pole. The truck was torn apart in the crash, with the driver and one passenger thrown free of it, because they had not been wearing seat belts; Stevens, who had been wearing a seat belt, was killed simply because he stayed in the vehicle.

Such horrifying tragedies made for a sombre class as Borsey and class instructor Andrew Phillips detailed all that goes into car crashes. Of particular note was alcohol.

"Most of the fatal crashes I've worked have been alcohol related," said Borsey.

The lieutenant – with the help of his wife Kim and officers Brian Kiel and Justin Wong – went through the sobriety tests performed whenever an officer suspects a driver has been drinking. Walking in a straight line, standing on one leg, following a finger with the eyes, a handheld breathe test; it was all detailed.

To add realism (and possibly also for fun), Kiel and Kim had both volunteered to drink alcohol throughout the class so the students could see just how the tests cannot be passed by an intoxicated person (don't worry – they both had designated drivers). Providing the sober balance, 15-year-old Mark Anuszkiewicz, a student in the class, also took the tests. Thankfully, he was found to be sober.

"It's not a right to have a license to drive on state highways," said Phillips.

Instead, it's a privilege and can be taken away. Refusing to take part in the sobriety tests will result in a suspension of the driver's license for at least one year.

The clear lesson learned from the class was that there is only one way to avoid being arrested for drunk driving if you are pulled over – stay sober.

Posted by Accessmilton Admin at Wednesday, May 26, 2010

I'm crazy about Officer Wong. Not only is a great Officer but he can blow that traffic whistle better than ANY other police officer in our city limits. It's really something to watch actually. If you drove thru carpool at school this year then you know what I'm talking about :) He's always smiling too. I like that part most.