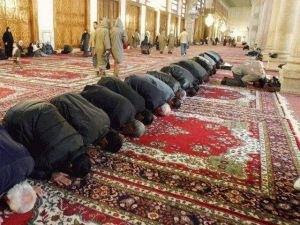 Many thanks to Nancy K. for sending this to us!
Courtesy theblaze.com
Muslim Prayers to Open Conn. City Council Meetings.
While the nation remains divided over whether a mosque should be constructed near Ground Zero in lower Manhattan, the city of Hartford, Conn., is going out of its way to show “solidarity with our Muslim brothers and sisters.”
Though the city doesn’t normally begin its council meetings with any sort of prayer, NBC Connecticut reports that the city council has invited local imams to deliver Islamic invocations at the beginning of council meetings during the month of September:
“One of the goals of the Council is to give a voice to the many diverse peoples of [New York] City, which is especially important given the recent anti-Islam events throughout the country.” Council President rJo Winch (sic) called it an important move for the Council. “I feel it is very important that, as a Council, we project a culture of inclusiveness in the City of Hartford. Too often it is our differences that divide us. In my opinion, it is our combination of differences that makes us strong,” Winch said.
Posted by Accessmilton Admin at Tuesday, September 07, 2010

I guess separation of church and state doesn't extended to Islam...

Most City Councils do open with prayer, Christian Prayer for the most part. Not anymore.

In God we Trust.
One Nation under God.

Now either all Faiths will be praying at government meetings or none. But there is nothing going on in America for us to be concerned about, until we are eventually outnumbered at the polls.

To 11:38a - once "we" are outnumbered at the polls I guess "we" get to exerience what the native american ancestors did after a couple thousand year run...and to think "we" lost the country in only a couple hundred this time!

LOL...time to move, fight or submit - not sure blogging is gonna get it done anymore brother!

Okay give it back to the Native Americans then if you feel so badly about living in the country that your ancestors took from the natives. I guess that is reasoning to give it up to everyone who decides they want to move here and change our country to fit their motivations. Everyone should leave and go back to their native countries and stay there then right? I am native American by the way, Cherokee, my ancestors came to Georgia on the Trail of Tears, so give it back to me if you are so tore up over being an American. It's still a free country so I can say what I want. Don't like, then don't read it or respond. In Cherokee I would call you AWyhiro.

How can we embrace the right to freedom of religion and express displeasure over this issue?

Either we believe that this freedom includes ALL religions, or we deny the wisdom of our constitution.

The First Amendment clearly states: "Congress shall make no law respecting an establishment of religion, or prohibiting the free exercise thereof; or abridging the freedom of speech, or of the press; or the right of the people peaceably to assemble, and to petition the Government for a redress of grievances."

My faith and beliefs are mine. However, I will have tolerance for those who believe differently than me. It is their right - and they are free to believe as they like. If this is not the case, then I have lost my right to believe as I choose.

So what in my comment led you to conclude that I dont like living in America?? Sounds like YOU don't like it "nothing to be concerned about until we are outnumbered at the poles". That statement sure sounds like someone that doesnt like the direction the country is headed (ie: different than you/"we").

My comment was simply pointing out that you are signaling defeat while I suggest you either "move - if you are defeated and can't handle it, fight - stand up for what you/"we" think is right, or just submit - "like it seems you are willing to do - again!".

I then pointed out that just blogging about it won't do anything. So pick one of the above and stop taking shots at fellow Americans my man!!

Muslims believe in God too. If Christians make invocations, so may Muslims and Jews. This is America.

Allah is not God or visa versa.
Muhammed was a warrior before Allah spoke to him in and then proclaimed himself the Prophet Muhammed.

One God. God cannot be All Loving and Evil at the same time, sorry.

Jesus says," Love your enemies and pray for those who persecute you." - Jesus, Matthew 5:44

Muhammed says, "Against them make ready your strength to the utmost of your power, including steeds offwar, to strike terror into the hearts of the enemies, of Allah and your enemies, and others besides, who ye may not know, but who Allah doth know."
- Qur'an 8"60

Not the same God, sorry!

"Blessed are you when men revile you and persecute you and utter all kinds of evil against you falsely on my account. Rejoice and be glad, for your reward is great in heaven." - Jesus,(Matthew 5:11)

"And slay them wherever ye find them, and drive them out of the places whence they drove you out, for persecution is worse than slaughter." - Qur'an 2:191

Yeah, I want people of this faith praying to Allah at City Council meetings. Would we be permitted to build massive Christian churches and worship centers in their countries? No Way. Yet we must tolerate and be sensitive to them here in America? Look how they treat their women!!

The focus of many ahadith, is war.
Muhammed taught his followers that there was nothing better (or holier) than jihad warfare. He told his men to offer non-Muslims only three choices: conversion, subjugation, or death. These teachings are not marginal doctrines or historic relics - they are still taught in mainstream Islam.
Not all Muslims agree with them of course, however, there is no mistaking the centrality of violent jihad in Islam.