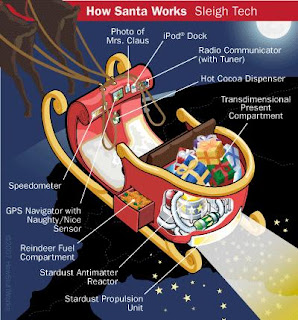 Rustic on the outside and state-of-the-art on the inside, Santa's sleigh would have to be a marvel in engineering. These are the main parts of the sleigh that would be needed to get Santa across the world in one night.

The front of the sleigh's dashboard would be dominated by Santa's own GPS navigator -- the elves would map out millions of destinations before Christmas Eve, just to make sure Santa doesn't miss anyone. The device would also have a built-in Naughty-or-Nice sensor that keeps Santa updated on children's activities. This is important, as even the most minor of naughty deeds committed within the last few hours of Dec. 24 can determine whether or not a child receives a shiny lump of coal.

A speedometer on the far left of the dashboard would allow Santa to monitor his flying speeds. On the far right would be a radio communicator -- Mrs. Claus sends broadcasts, and the elves update Santa with weather reports and toy inventory.

For in-flight entertainment, we'd like to the think that the elves would have installed an iPod dock -- perhaps even a red-and-green iPod, which would come with enough memory to play Christmas songs for the entire year through. There would also be a hot cocoa dispenser in the middle of the console, and fuel for the reindeer (in the form of carrots) in a compartment located on the left side of the sleigh.

Ever wonder how Santa fits all of those presents into one bag? Think of a transdimensional present compartment in the form of a traditional gift sack, which would act as a portal between the sleigh and the North Pole. However, we'd also like to think that Santa may have harnessed the power of nanotechnology and found a way to miniaturize millions of presents into one large bag. But this information remains unconfirmed.

What is antimatter? Is it some kind of magical substance Santa uses to power his sleigh?

Antimatter is the opposite of regular matter -- the mirror image of normal particles that make up everything we can see or touch. The big draw to antimatter is the amount of energy it helps create. When antimatter and matter come into contact, they annihilate each other -- breaking apart into tons of smaller particles -- and 100 percent of their masses convert into energy.

Although antimatter propulsion rockets are mainly used in science-fiction shows to allow spaceships to travel at warp speed, the possibility of designing one is very real -- NASA is currently developing one that would get us to Mars within a matter of weeks. [source: NASA]

Santa's would have to be way ahead of the game, however, and we'd like to imagine that he has his own custom Stardust Antimatter Rocket. It would be small enough to install in the back of his sleigh and fast enough to deliver every present to all good children across the globe. Of course, if the rocket ever malfunctions, the reindeer would be there to back Santa up. (Learn more about how Santa makes it around the world in one night.)

To learn more about Santa's reindeer and how they manage to fly, head over to the next page.