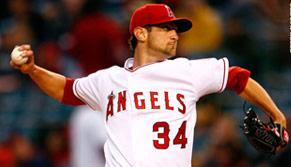 Angels pitcher Nick Adenhart, 22, was beginning his first full season in the majors when he was killed in 2006.

NOTE: With speeding wrecks continuing to be the norm in Milton and council doing nothing to address the situation, we thought the following story might be of interest.

A convicted drunken driver was sentenced Wednesday to 51 years to life in prison for a crash that killed Los Angeles Angel pitcher Nick Adenhart and two others, the Orange County, California, district attorney said.

Andrew Thomas Gallo, 23, of San Gabriel, California, received the maximum sentence after a jury found him guilty in September of three felony counts of murder, felony drunken driving and two other felonies, according to District Attorney Tony Rackauckas and court spokeswoman Carole Levitzky.

Gallo had previously been convicted in San Bernardino County, California, for driving under the influence in 2006 and was on probation at the time of the April 2009 crash, the district attorney said.

Authorities say Gallo's blood-alcohol level was more than twice the legal limit when he sped through a red light and crashed into a car.

Adenhart, 22, of the Los Angeles Angels of Anaheim, who was beginning his first full season in the majors, was killed. He had pitched just his fourth Major League game hours earlier.

The crash also killed Courtney Stewart, 20, a student and former cheerleader at California State University at Fullerton, and law student Henry Pearson, 25, who was working toward becoming a sports agent, authorities said.

A fourth victim, 24-year-old Jon Wilhite, a former baseball player for the Cal State-Fullerton Titans, was critically injured and is now in stable condition, the prosecutor said.

"Before drinking, set up a plan to have a sober driver," Rackauckas said in a written statement. "If you make the decision to drink and drive, we will make the decision to charge you with vehicular manslaughter or murder and you may spend the rest of your life in prison. During this holiday season, think about the pain on the victims' families' faces before you drink and drive."

In addition to being drunk and on probation, Gallo was driving on a suspended driver's license when his minivan, going about 65 mph in a 35 mph zone, crashed into Adenhart's vehicle at 12:23 a.m. on April 9, 2009, authorities said. His license had been suspended because of a prior drunken driving conviction, the prosecutor said. Gallo's 21-year-old step-brother was a passenger in the minivan.

After the collision, Gallo fled on foot, but was arrested less than 30 minutes later about two miles away by Anaheim police officers, authorities said. Two hours after the crash, Gallo had a blood alcohol level of 0.19%, well above the legal limit of 0.08%, authorities said.
Posted by Accessmilton Admin at Tuesday, December 28, 2010

Wow atleast one state with tough dui laws. If it had happened in Milton, and he was a resident it would have been swept under the rug

You speak the truth.