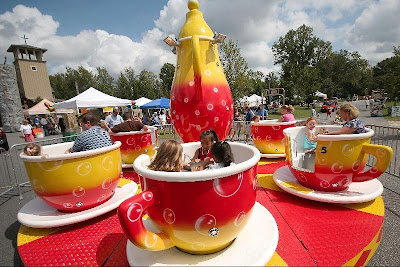 The City of Milton hosted its second annual Milton Roundup this past weekend. With more than 3,300 attendees, the Roundup was a huge success. The fun-filled day started with a Classic Car parade from the new Super Target on State Route 9 all the way to the Publix parking lot at Birmingham Crossroads. After the parade, the Roundup officially began and Milton citizens were able to enjoy games, rides, shows and food all day long.

The tethered hot air balloon rides were the big hit of the day as families were able to float nearly 50 feet in the air in the basket! Kids (and a few adults too) rode the mechanical bull, ponies and inflatable rides. The Public Works Chili Cook-off was another hit. "Cookin' with Gas" took home the top spot with 1st place and the Spirit Award, followed by "Guns & Hoses" in 2nd place. "Fire & Gas Technicians" came in 3rd place and also won the People's Choice Award for the second year running! Congratulations to the winning teams!

Laura Bentley and the Equine Rescue Team presented Milton's Fire Department with the gift of an equine rescue sling, which Milton's firefighters can use to rescue trapped horses, and gave a demonstration of the tool in use. Thanks to donations of water and cold drinks from Publix, the Milton Public Safety Fund Drink Stand netted a whopping $931.00! Thank you to everyone who donated to help our Public Safety fundraising efforts!

The day ended when three massive hot air balloons lit the dusky sky. This was surely a day and an evening to remember. The City will have to work even harder to top this event next year!
Posted by Accessmilton Admin at Monday, September 22, 2008

Great job to Linda Blow and the Roundup Committee members.

Ditto!!!
What a great time!