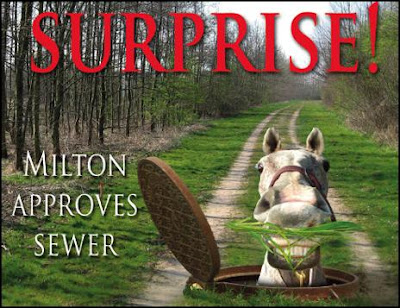 The policy does expand sewer service, but it doesn’t expand it to every property that already has a Fulton County sewer permit. The agreement that Milton reached includes allowing sewer expansion on only a portion of the properties that Fulton County assured could have it.

It was a theatrical end to the seemingly endless debate over the city of Milton’s sewer policy, beginning with heated arguments on both sides and ending with a final vote that Milton Mayor Joe Lockwood all but demanded in another contentious Milton City Council meeting held on September 15.

As the meeting began, Councilman Alan Tart and Councilwoman Julie Zahner-Bailey tried to delay a definitive decision by removing the scheduled sewer debate from the agenda, wishing to add it to a workshop sometime later in the month.

They argued that council members and citizens needed more time to evaluate the proposed policy. Lockwood, embattled and under fire from community leaders for not taking decisive enough action to resolve the sewer log-jam, took the gloves off, reversed course and forced a motion. That motion was approved in a 4-2 vote. (Councilwoman Tina D’Aversa, who would likely have voted with the minority, was absent for the first half of the meeting.)

The issue, bogging the city down for nearly two years, came to a head last weekend when Milton staffers released a map showing which plots of land within the city have sewer access and which do not. The controversy began when staff admitted there were six properties to the south of the city, totaling 110 acres, whose current sewer status was unknown. These were, characteristically, marked in red.

It turned out the properties in question did not have current sewer service, but had been previously approved for sewers by Fulton County. Milton staff tentatively recommended allowing these properties sewer. Lockwood defended their position. “All it does is define the existing areas that had sewers in them,” Lockwood said, “and give us the distinction where Fulton County said, ‘These are the people who have always had sewer and always had the right to sewer.’”

To the “no-sewer-whatsoever” group, however, these additions essentially amounted to an expansion of the sewer system in Milton. Their position was crystal clear: absolutely no sewer extension to be allowed within the city for any reason.

For Lockwood, it was quite a an untenable dilemma – abide by the wishes of several influential council members and what could be interpreted as a majority of his citizens (based on last November’s election results) or follow through on what Fulton County had approved, which he may be legally obligated to honor?

Sewer is the sacred cow in the city of Milton that has seemingly split the populace right in two. Since the city’s incorporation two years ago, any city-sanctioned expansion of sewers has largely been demonized as a precursor to higher density. Milton likes its horse farms and quaint rural feel. Sewers are seen as the forbearer for the demise of that bucolic way of life. Or so goes the “no-sewer-whatsoever” group philosophy.

When Milton incorporated from Fulton County, the two entities made an intergovernmental agreement (IGA) clearly defining where sewers were already located and what properties had the right to put in sewer.

When Fulton County ran the area, they could make a policy and then break it at their pleasure, and the future citizens of Milton had little say in the matter. That was one of the motivations behind incorporating the city.

The impasse began with the fact that the county promised the option of sewers to several properties before Milton incorporated, but some of Milton’s elected officials reached office on a strict promise of no sewer expansion.

Fulton County Commissioner Lynne Riley staked out her position – and that of the county – bluntly: “I will defend each and every single parcel that has previously enjoyed the privilege of sewer eligibility should they wish to preserve that right and privilege,” she said.

D’Aversa was equally resolute. “If you say no sewer extension, then you’ve made a statement that that’s your policy for your city,” she said.

The council meeting had a sizable audience of citizens wishing to hear the council’s deliberations on the subject and, hopefully, come to an agreement on the sewer issue.

The residents attending the meeting seemed to be split on what to do – finish the controversy and put an end to two years of very public bickering and humiliation? Or delay a vote so that both the public and council members could study the map further? Some suggested the sewer opponents thought they were a vote short of endorsing their position and may have been trying to buy precious time needed to swing a vote their way.

A major point of contention was the speed at which the resolution came up. According to council members, the IGA and map were released on the Friday before the meeting, giving members just the weekend to review it. Citizens had even less time to look at the map.

“We’ve looked at enough of these things and they haven’t changed drastically,” noted Councilman Bill Lusk. “It’s basically the same map that we got from Fulton County.”

If the writing had not been on the wall after the initial vote to delay debate, it certainly was when the mayor’s position became abundantly clear halfway through Zahner-Bailey’s intense questioning of Milton’s new Community Development Director, Alice Wakefield. It was her department that created the map. The questioning tactics directed at Wakefield by several council members resembled that of an interrogation, and Lockwood took offense.

“This is the reason I’m not supporting a [further] work session,” said Lockwood. “I don’t want to see our staff get on trial like this. I think it’s time we take a vote and move forward. I know where everybody stands on this. We could go round in a big circle and come back. We could spend three more hours on this [or] we could spend two weeks on this but we’re all going to come back to the same decision. We could spend two more years on this. At this point we have beaten this thing to death.

“We’ve lost several good people,” he continued, referring to City Administrator Billy Beckett, who announced his resignation last month, and former Community Development Director Tom Wilson, among others. “It has cost the city hundreds of thousands of dollars, we haven’t been able to move forward [because] everybody is sits around and twiddles their thumbs every day because they don’t know which way to go. I’m ready to make a decision.”

As he said this, D’Aversa stormed out of the meeting and the audience turned angry, shouting support or anger toward the mayor. Shouts of “stonewalling” and “what’s the rush?” were called out several times, each with equal vigor. After another hour of debate, Lockwood decided to invoke the city’s newly adopted speaking time limit policy and promptly cut Zahner-Bailey off.

A MOTION TO APPROVE

Councilwoman Karen Thurman made a motion to approve the IGA and map, but only allowing sewers in the Crabapple Crossing properties and nowhere else (these properties were already covered by the Crabapple Master Plan, which was agreed to by the city months ago) and cut out more than half of the properties disputed from sewer consideration.

D’Aversa, Alan Tart and Zahner-Bailey voted against the new sewer IGA. Mayor Lockwood and Council members Lusk, Thurman and Burt Hewitt voted for the motion, and it carried 4-3. And so Milton’s sewer policy was finally born.

Those on the losing side of the argument, namely D’Aversa and Zahner-Bailey, were infuriated at the decision, despite reassurances by the mayor that the IGA was only defining where sewers had always been allowed.

“Now we’ve made the statement that we allow sewer extension,” D’Aversa said. “I think it’s a precedent.” She went on to note her displeasure at Lockwood forcing the issue through so quickly. “These maps were never provided to the public. Open and transparent government means that you at least allow the citizens we represent to view what it is we’re about to discuss and vote on. The thing that I’m most disappointed with is that we did a disservice to our community and our citizens by not allowing them to view the data. Public process was undermined tonight.”

Despite the policy’s adoption, the issue is far from resolved. While Milton may have reached a decision on where sewer may go, the county still has to agree with them. Right now it looks like Fulton will not.

Almost as soon as the measure was passed, Lynne Riley said that she cannot support an agreement that does not allow everyone a sewer who was promised it. “Based on what I have seen, there are definitely parcels that were omitted by city council action that are legitimately entitled to sanitary sewers,” she said. “What was presented on August 4 was the county’s representation of that which was in place when they incorporated… The city chose to revise it further.”

It was in the August 4 council meeting that Riley and several county staff members presented a similar map and IGA before the council outlining exactly where Fulton County allows sewers.
“If you knew that your property was worth $1,000 an acre and by an action taken by council it’s now worth $10 an acre, you would not be happy,” she continued. “The fact that a property owner has not acted to connect a sewer does not diminish the value of the property based on eligibility. It was the city of Milton that chose to remove their rights… I certainly would want affidavits that would release the county from liability from these property owners before I would consider taking away that right (to sewer).”

The next step, now that Milton has come to an agreement on where they believe sewers should be allowed, is for Fulton County to look it over and see where the two differ. Once the differences are ironed out, the new Intergovernmental Agreement can become fact. The issue of “expanding sewers” will likely be tackled again in the near future as those properties allowed sewer by the county decide whether they want to put it in.

For Mayor Lockwood, he’s just happy it’s over for now. “It just came to the point where we had to make a decision and do it and move forward. If we had gone on further people would have been caught up in analysis paralysis. I’m sure we would come up with the same decision a month from now, two years from now. Sometimes a good leader has to make the right decision and stick by his guns and move things forward. I am 100 percent confident that we made the right decision.”

Only now, Fulton County doesn’t like it.
Posted by Accessmilton Admin at Thursday, September 25, 2008

That picture does not do Julie justice. Not enough makeup?

That goes both for Julie and the old horse!

I posted "So Lame" and it was meant for poster #1, not JZB or the horse.