Recipe Of The Week: Tomato Pie! 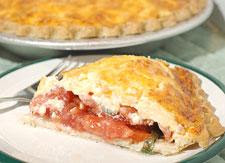 Magnolia Media will be implementing a recipe section on all of it's community sites starting later in August. In the mean time, we thought the following might wet your appetite. Do you have a recipe that you would like to share? Then email us at sales@magnoliamedias.com / Subject Line: Recipes!

From the Kitchen of . . . Pam Forester, Alpharetta

Pam Forester, a cooking enthusiast who still makes her biscuits from scratch, lives in Alpharetta with her husband, Joe Hazelquist. A payroll manager at TRC Staffing, she also enjoys reading and traveling.

If you like tomato and mayo sandwiches in the summer, then you’ll love this savory pie. It’s based on the same ingredients, plus a couple of “extras” — cheese and fresh basil. And it’s pretty enough to serve to company.

Forester developed this recipe with a co-worker friend, Becky Lester, who had gotten a verbal description from a woman in Birmingham. “The woman wouldn’t tell her everything that was in there,” Forester said. “So she and I just developed it based on what Becky remembered of how it tasted.” Over the years, Forester replaced dried herbs with fresh and replaced half the cheddar cheese with mozzarella. “The final product is awesome,” Forester said. “People always ask for the recipe.”

Choose the most fragrant, fresh-picked tomatoes you can find. But be sure to drain the slices well on paper towels. “The real secret is to get the tomatoes as dry as possible,” Forester said. “Otherwise it can be a little watery.” — Deborah Geering, for the Journal-Constitution As pretty as cherry pie but as savory as a slice of summer, this pie is best when made with fresh-picked tomatoes, of course. If you make your own pie crust, try stirring in a teaspoon of dried basil with the flour.

Preheat the oven to 375 degrees. Bring a large pot of water to boil; set a bowl of ice water nearby. Drop the tomatoes in the boiling water for about 30 seconds. Remove with a slotted spoon and place into the ice water. Peel the skins from the tomatoes. Slice off the stem-side tops, turn the tomatoes upside-down over the sink and gently squeeze to remove the seeds. Cut the tomatoes into thick slices, removing any remaining seeds, if necessary, and drain on paper towels. Line the crust with foil and pie weights or dry beans. Bake for 10 minutes, then remove foil and weights and continue baking 5-10 more minutes, or until crust is golden. Remove from oven and reduce heat to 350 degrees. With additional paper towels, pat the tomatoes as dry as possible. Cover the bottom of the pie crust with a layer of tomato slices. Sprinkle lightly with salt, pepper and basil. Arrange another layer of tomatoes and sprinkle with salt, pepper and basil. Top with remaining tomato slices and sprinkle with remaining salt, pepper and basil. In a small bowl, stir the mayonnaise and cheese. Spread evenly over the pie. Bake for 30 to 40 minutes, or until the top of the pie forms a golden brown crust. If the edges start to get too brown, top with a piece of foil with an 8-inch circle cut out of the center. Serve warm.

Also check out the recipes on Milton's first online magazine, Miltonville.com. These are the favorites recipes of some prominent families in Milton. We welcome your favorites too. Check out the MILTON COOKS section. Also other bloggers such as Blissful Glutton and Tammy's Recipes.