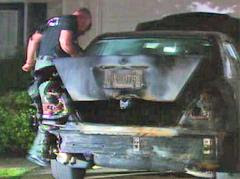 MILTON, Ga. -- Fulton County officials said they have arrested three teens and charged them with 57 felony counts in connection with a recent series of car bombings with Molotov cocktails in the city of Milton, north of Atlanta.
The felony charges include arson, criminal damage to property and possession of explosive devices in six vehicle fires between 11 p.m. July 24 and 3 a.m. July 25. Each teen is charged with 19 counts.
Officials said the teens -- ages 15 and 16 -- told authorities they learned "how to do it" from playing the video game "Grand Theft Auto."
Channel 2 and wsbtv.com reported when three cars were firebombed in one North Fulton County neighborhood. The three cars, 2 Mercedes and a Honda, were all parked outside the owners' homes within a half-mile of each other.
Two of the cars were in the Fairmont subdivision on Keyingham Way just off Highway 9.
Investigators said after the incidents, they went to a local Wal-Mart and pulled receipts. They found a receipt that contained the purchase of Sprite bottles, red rags and lighter fluid.
Authorities said they pulled the surveillance tape from the time of the purchase and were able to identify the three teenagers.
The U.S. Bureau of Alcohol, Tobacco and Firearms assisted with the investigation.
Posted by Accessmilton Admin at Thursday, August 07, 2008

Is sewer responsible for this crime spree or is it just mean kids?

What video game or movie can these juvenile delinquents watch to learn about the consequences of breaking the law?