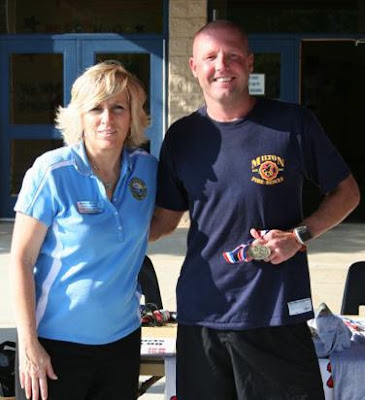 Lt. Thom Brown, a Milton firefighter, took first place June 17 in the men's 5K race at The Georgia Police and Fire Games hosted by The City of Carrollton.

Brown, an avid runner and athlete, set a new state record for the games in his age group with a blazing time of 19:15 - about six minutes a mile. He is pictured above received his gold medal from games committee member Dottee Morton.

The Georgia Police and Fire Games began in Carrollton in 1984, growing to more than a thousand participants from its original 300.

Website's web said...
This comment has been removed by a blog administrator.
9:19 PM