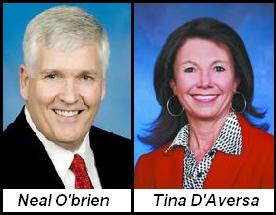 June 06, 2010 MILTON - Former city council member Tina D'Aversa has served the city and its Board of Ethics with papers demanding their verdict against her be overturned.
In late April, the city was served with papers arguing that D'aversa was denied constitutional rights and due process when the ethics board found her guilty of violating the city's ethics laws. She is taking the case to the Fulton County Superior Court.
The controversy began during last year's election, when D'Aversa was reported to have sent an email offering her then-opponent Joe Longoria a place on a city volunteer board if he would drop out of the race. D'Aversa maintains she did nothing wrong, however some, including former Council member Neal O'Brien, saw it as an attempt at bribery. O'Brien filed an ethics complaint against D'Aversa in the last weeks before the election. O'Brien was not involved in the alleged ethics violation.
In March, D'Aversa was found guilty by the city ethics board of conduct unbecoming of a public official and using her city email to conduct campaign business. The board declined to punish her, since she had lost the election by the time of the hearing.
During the hearing, Ethics Board Chairman Clint Johnson maintained that anything regarding the complaint - including O'Brien and his reasons for filing it - could not be used as evidence, a point which frustrated D'Aversa and Lucian Gillis, her attorney, who had hoped to paint the complaint as maliciously timed, frivolous and that O'Brien himself was holding a grudge against D'Aversa. The only evidence and testimony allowed for consideration was related to the email exchange between D'Aversa and Longoria.
Gillis was flabbergasted by the restraint placed upon his case by Johnson.
"In 30-something years of practicing law, I don't ever remember being denied an offer of proof," Gillis said, highlighting just one of the problems he saw with the proceedings. "That's how you perfect the record. 'Here's what I would show if you would let me.'" An "offer of proof" is used in law to enter evidence into the record without it being considered in the current hearing. This evidence can be used to show the need for an appeal.
The city has received the case and must now respond to the filing.
Posted by Accessmilton Admin at Monday, June 07, 2010

D'Aversa and T-Mobile will win. Thank your leaders (City Council) for all of it. Their decisions and lack of action are what is costing our city money, our money! Time to change them all out Milton! There is no leadership in Milton, only back room deals and back room relationships are running this city poorly.

You will have to blame this one on Neal, Mark Scott, Karen Thurman and Bill Lusk along with Cap'n Johnson for their back room deal and plotting. How much do you think it costs us the taxpayers?

That will be Cap'n Buffoon Johnson, to you.

Oh yeah, that's funny, he did say that during the hearing. "don't call me Your Honor, just call me Captain". Well at least he got it right.

Appen should do open records on the city, their story is lacking depth and substance.

So many in Milton want desperately to be political power brokers and don't know where to start. Their lack of knowledge makes them appear to be bumbling fools and the laughing stock of Fulton and surrounding areas. Fifty years ago it would be said, they are showing "ole rusty".