Oxendine: Milton Owed, But Must Come Through Fulton 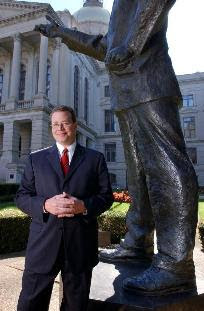 State Insurance Commissioner John Oxendine says he has $900,000 that belongs to the city of Milton.

Milton, incorporated 15 months ago, is eager to have it.

But one stumbling block remains: Fulton County, the would-be middleman in the transaction, says it would be illegal to give Milton the cash. Fulton officials say they will be glad to take the money from Oxendine, but that they can't pass it along.

"That's not fair," Oxendine said. "It should be spent in Milton."Milton Mayor Joe Lockwood is trying to find a solution to the sticky problem."We've got our city attorneys working on it," Lockwood said. "It makes you realize the frustration people have with government. When it's so black and white, it's frustrating that people can't make a good decision and do the right thing."

The problem began last year when Milton officials missed a deadline to claim the tax money its residents paid on insurance premiums. The oversight came a month after Milton became a city, Dec. 1, 2006.

After the mistake became public in July, the City Council conducted 20 hours of closed-door sessions to discuss "personnel matters." A few days later, city manager Aaron Bovos resigned.
City officials have been pleading with Oxendine to help them recover the money. But Oxendine said he can't give it directly to Milton.

But he thinks he's found a loophole, which could allow him to get the funds to the city via Fulton County.

"I'm willing to pretend," Oxendine said. "It's a stretch, but I'm willing to do it to help. I can only do it for a brand new city."So, Oxendine says his office could send the money to Fulton County, which could make it available to Milton.

Milton had hoped for a legislative solution, but state Rep. Jan Jones (R-Milton) said she and the state Legislative Counsel's office researched whether there was any way to pass a law or tweak an old one to help Milton recoup the money, but to no avail."There is no legislative remedy that is constitutional," Jones said.

Oxendine said his lawyers tell him he can't rebate the money to the individuals who paid it. And even if he could, it's not practical because insurance companies pay it in a statewide lump sum.
All this makes Milton Councilwoman Tina D'Aversa a bit crazy.

"It was an administrative error," she said. "We were a new city. We're never going to be in that situation again. That money belongs to the people of Milton. This just exacerbates the error."

In March 2007, the city filed appropriate paperwork, which automatically renews itself annually.
Posted by Accessmilton Admin at Saturday, March 08, 2008

This deserves National News! What an atrosity!

I think I'd like a rebate! Maybe they can spend less then what the US Government did in sending out notices.

It's obvious you didn't read the article. There is no constitutional way Oxendine can pass along the money through Fulton. Your representative said so. South Fulton has nothing to do with this. Always looking for scapegoat. Milton screwed up and its South Fulton's fault? READ

I should have known better than to read this article in the daytime since I went to night school and can't read too well during daylight hours.

This site is definitely not for night school grads.

I guess the person who commented takes newspapers and politicians at their word. In other words, if it's said or written, it must be true. No need to question it. Night school must teach people how to THINK, not just read!

pas·qui·nade
Pronunciation: \ˌpas-kwə-ˈnād\
Function: noun
Etymology: Middle French, from Italian pasquinata, from Pasquino, name given to a statue in Rome on which lampoons were posted
Date:1658
1 : a lampoon posted in a public place
2 : satirical writing : satire

R-Man: It was you, wasn't it? Using those big words again. Sounds like mar.in.ade. Don't forget my present. C U @ the Swamp...