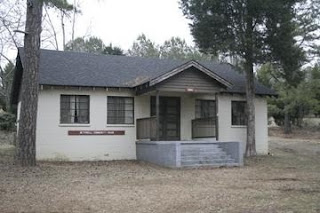 The Bethwell Community Center, located near the intersection of Francis Road and Hopewell Road, will be renovated to house summer camps for local children. Additions will include new facilities, a large porch and a park. Jonathan Copsey. (click for larger version)

MILTON – Residents may be surprised to hear it, but Milton has never constructed a building before. That is, it hasn't yet. The renovation of the old Bethwell Community Center will be the very first such project for the young city.

"We are creating a new bid package just for projects like this, since we haven't had one before," explained Milton's Director of Parks and Recreation Cyndee Bonacci. "We've done lots of road projects, but none including building construction and the types of civil requirements including parking spaces and such that we would need for a project like this."

The renovations come at a cost of $15,000, and include a host of additions to the aging brick beauty, including a brand new porch, new bathrooms, sinks, a water fountain, storage closets, windows and doors, as well as central heating and air. The new facility will be brought up to city code and will be compliant with the American with Disabilities Act.

"It's good to be starting with a smaller project, knowing there will be things we will learn as we go," Bonacci added.

Located near the corner of Francis Road and Hopewell Road, the small, 1,300-square-foot building was built in the 1950s and sits on less than an acre of property. Milton is obligated to keep the structure as a community center for everyone to use. If the city tries to demolish it or use it for any other purpose, the property will revert to its original owners.

According to Bonacci, city staff wanted to preserve as much of the original building as possible.

The site has been used as a community center for the Bethany-Hopewell (hence "Bethwell") area since the late '50s, when the area was still unincorporated Fulton County. The county ceased using the site long before Milton was formed, and the building has been deteriorating since.

Renovations are expected to be complete by the summer, with summer camps beginning in June. The facilities will be available for residents to book parties or gatherings at about the same time, and bookings will be taken beginning in May by calling the Parks and Recreation Department at 678-242-2500.

Party for two in that building. Thanks for telling us where more of our money is being "invested".

moron, the property deed limits what the city can do with it and if they dont comply then the property would go back to the family that deeded it so would you rather they just give it back to the original owners

Moron here, the question is can the city afford it. If not, let it go back to original owner(s).