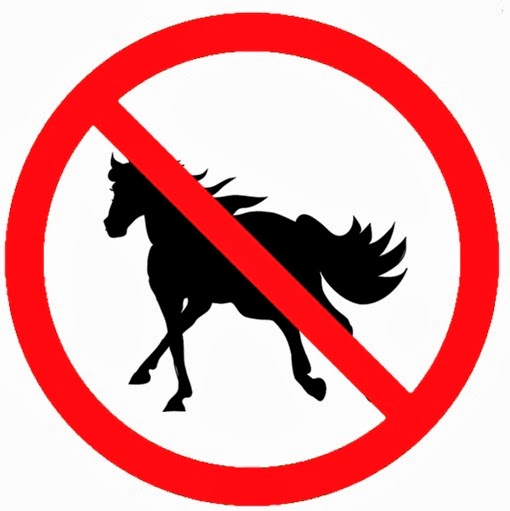 Thanks for the email. The Council adopted Parks and Recreation master plan does not indicate the need for an equestrian park in Milton as there is one regionally already existing at Wills Park. If that should change, I will keep your contact information.

Have a good day,

A couple of questions to consider:

A. Didn't we incorporate so we wouldn't have to rely on the City of Alpharetta? B. Are we not the City that plasters pitures of horses all over city based media and talks about "rural character" every other word?

Mr. Cregge is not at fault here. He can only work with the tools given to him by council and staff.

Not one current or past elected official has been an active advocate for promoting the equestrian lifestyle. They have turned down the opportunity to become a leader within the Equestrian Community by supporting Liberty's Law which would protect horses from abuse, they did not put legislation in place in 2006 to encourage farms to remain, and the lie continues to this day. Residents even had to ask staff to post a notice new years eve about the dangers of fireworks near horses after they failed to place a notice earlier in the week even after a horse died this past July 4th due to being spooked by fireworks.

Why spend millions to build an equestrian park in Milton when the survey response didn't show enough demand?

We'd then have to compete with Alpharetta's already established venue, resulting in one or both venue's suffering from lack of usage.

It's not like local folks are having to drive all the way to Conyers...they're going to Alpharetta.

You know Tim, those who stir up shit should have to lick the spoon. Food for thought.

Enjoyed reading your points and appreciate the perspective.

A few things to consider:

1. Did Milton not incorporate in 2006to NOT rely on Alpharetta?
2. City of Alpharetta purchased Wills Park from Fulton County a few years back. Since that time, there has been debate as to whether or not to hold onto the equestrian portion of the park and utlize those lands for other types of recreation. While Alpharetta was once covered in horse farms, that is no longer the case.
3. Milton Georgia promotes horses all over it's website, but there is no action after. A horse park would promote the ideology professed and possibly encourage other horse owners to move to the city.

As far as 7:23 goes, image without action is nothing more than a facade..."Food for thought."

1. No Tim, Milton incorporated so that they would have local control instead of having to rely on Fulton County for services.
2. I'm not familiar with this debate and this is the first I've heard of it in over 25 years of living in the area. Alpharetta/Fulton County have always used that portion of the park for a multitude of events, not limited to just equine. Crabapple was once covered in cotton farms, should be go back to that?
3.I wouldn't say they promote horses, that would be like saying the San Diego Padres promote Catholic Missionaries in Latino areas. I would agree that they chose the horse as their logo. I disagree that we need to spend money for something that has already been voted on by a majority to not be necessarily desirable and I don't see that it would encourage more horse owners to move to the city on its own.

Mr. Preston, This area was better for property owners prior to incorporation. Do you honestly believe local control has been positive?

Re Post 7:23 am.
I enjoy AccessMilton but not this woman's tripe. She always comments on anything Tim posts regardless of content. Her background is obviously at the lower rung.

Tim, do your readers a favor by blocking all comments from this sick old woman.
Thank you.

My answer has absolutely nothing to do with whether or not I believe local control has been positive or not.

Local control was the major reason Milton incorporated...how positive or negative the results have been are not part of this discussion.

Bill:
My apologies for the delay in responding to your most recent post.

1.You are half right; we did incorporate for local control but also to “preserve the rural character”of the area with horses being a huge part of “rural”. There are easily over 10 images of horses plastered all over the city website as well. Various stories are easily found online showcasing this fact. Here is one from the AJC’s Doug Nurse=>http://miltonga.blogspot.com/2007/11/welcome-to-milton.html

2. A lot of citizens are not aware of the recent actions of Wills Park; from Alpharetta taking control from Fulton to suggestions to remove the equestrian facilities. Not sure what you mean by going back to cotton farms; I am simply saying put action behind the image. There is no “going back” as a few citizens have moved to Milton recent and brought horses along.

3.I went to the City of San Diego’s website / https://www.sandiego.gov/ and saw no images of padres or catholic missionaires or, for that matter, a base ball team. Your analogy was not sound.

In conclusion, if the city graduates to another image than a horse, no problem. If horses are no longer a viable option for Milton, no problem. If city and citizens do not want a horse park that would put action behind the image and possibly encourage other equestrians to move here, again, no problem. However, if my family chooses to sell our nine acres of prime real estate for highest and best use, then I am confident that you will be in full support. After all, horses really don’t have a place in Milton’s “Rural” community anyway, right?