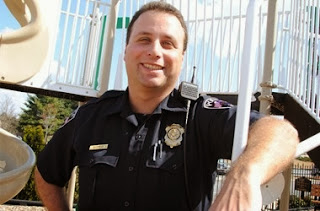 Milton Community Outreach Officer Ara Baronian has been named Officer of the Year for 2013.

A four-year Milton policeman and father of two, Baronian was chosen because of his work in raising more than $24,000 for the purchase of K-9 officer Kyro, plus his expansion of the Rape Aggression Defense (RAD) classes, Milton Police and Citizens Together (MPACT) neighborhood watch program and Citizens Police Academy (CPA).

And it’s not stopping in 2013 – Baronian kicked off the new year with two more MPACT neighborhoods and three separate RAD classes for children, beginners and advanced users.

“Officer Baronian has truly embraced his role as the community outreach officer and it shows in this work,” said Capt. Shawn McCarty, who runs the City of Milton Police Department’s Uniform Patrol Division. “His efforts have greatly helped the department overall in providing quality services to the city.”

Baronian transitioned into the community outreach officer position after two years of patrolling Milton on morning watch. He initially got into policing to do meaningful work with children and the community, and the job has given him a great opportunity to meet with parent-teacher organizations, Boy and Girl Scout troops, homeowners’ associations, and more.

“It has been a very rewarding undertaking,” said Baronian. “I get to bring policing to the community, and let them see what it’s like out there on the road -- not to mention how they can keep themselves and each other safe.”

And though he doesn’t do it for the accolades, the typically humble Baronian admitted being named Officer of the Year was a real accomplishment.

“There truly is no greater feeling than being honored by your peers. Something like this, it really makes all the hard work worth it.”