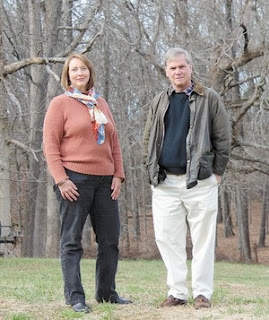 by Carolyn Aspenson / The Milton Herald

MILTON, Ga. — Laura Rencher has lived in Milton for six years and is concerned that the reason she moved here — the rural character — is changing.

Rencher knows change and growth are inevitable, but thinks the city can grow and still keep its rural charm.

"Every morning, I drive down the streets of Milton and am frustrated to see all of the development," Rencher said. "Our green space is quickly being eaten up by rabid developers, and the city hasn't planned proactively to maintain the rural character as stated in the 2030 Comprehensive Plan – and it's time to initiate change."

Milton was named "best quality of life" by several national trade publications last year, which has made the city a popular destination for newcomers. Milton's Growth and Development Report states about 900 homes are under review, under construction or being rezoned.

Rencher said she doesn't seek to put the brakes on growth. Instead, she wants the city to manage growth more responsibly. That's why, in November, she formed a group called Preserve Rural Milton.

A Preserve Rural Milton Initiative petition followed and a Facebook group was formed. It now has about 130 members with a goal of bringing the community together to initiate a change in focus within the city.

"The main concern in Milton has always been to maintain low density, but density has become a distraction to the real issue, which is land conservation," she said.

The Preserve Rural Milton petition asks Milton Mayor Joe Lockwood to hire a consultant specializing in land conservation to create a "green print" of the city.

The green print would provide details on green space throughout Milton and give options for future community development planning focused on land conservation.

Jack Lindon, a board member for Milton Grows Green, thinks the city is headed in the right direction, but has more work to do.

"I would like to see the city develop incentives for developments," Lindon said. "They could be financial incentives or ones similar to those offered in transfer of development rights programs."

Despite resident concerns, Lockwood said the city has stepped up efforts to keep Milton rural.

He said the December 2013 approval of a 27-home development on Bethany Bend is an example the city's effort to preserve Milton's rural character.

The development was denied twice previously, but approved when the developer accommodated the city's requests to reduce its size.

"We approved the subdivision with an additional 25 feet of buffer space not required by Agricultural-1 (AG-1) regulations, making it a total of 75 feet of space, and also capped the sewer," Councilmember Matt Kunz said. "About half of the land will now be left as undeveloped, natural land."

Rencher said the approval was a compromise.

"In the past, it seems that previous councilmembers felt they couldn't control an influx of high density housing and commercial interests, so they just blocked all of it by stopping any rezoning out of AG-1 and stopping the sewer," Rencher said. "This is a step in the right direction, but it's not a true land conservation subdivision."

Rencher said her group would like to see the city prioritize land conservation above other projects.

"It's not going to be cheap, but there are financing options available and other projects could be put on the backburner," Rencher said.

The city has also imposed a moratorium on new rezoning cases, hoping to pause long enough to change the rules, possibly tightening them.

City Manager Chris Lagerbloom said the city is already looking into ways to conserve land and has applied for consulting and peer assistance related to green space from the International City Management Association.

"If awarded, this will potentially allow us to fit a tremendous amount of research into a short period of time and cause the implementation of short-term items that could benefit the city," Lagerbloom said.

To learn more about the Preserve Rural Milton Initiative, visit www.preserveruralmilton.org. The city of Milton website is www.cityofmiltonga.us.