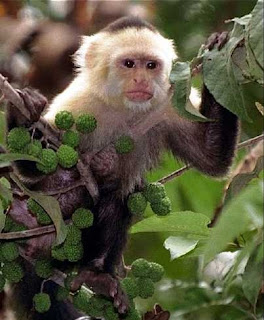 A Permanent Resident Of Milton Georgia; The Capuchin Monkey.

It was a crazy night at this past Monday's council meeting...or shall we say it was a zoo? With a tornado warning sending all occupants to the center most part of the building halfway through the night, it was an obvious sign of things to come.

While a contested senior living facility across from Cambridge High had been a topic, it quickly lost favor due to the developer withdrawing his application. This paved the way to focus on Dean Riopelle and his 20.74 acres.

He applied for a use Permit for Exotic Animals to operate a Primate and Exotic Animal Preserve on his property. This parcel in the middle of Milton is home to an estimated 100 animals including donkeys, wallabies, and porcupines. His passion, however, is a small type of monkey no bigger than a house cat called a "Capuchin" which he breeds and raises. Dogs are also a part of the mix; some well over 100 pounds.

His goal was to open the property up for scheduled tours. He requested the approval for building a public bathroom for his visitors, specific parking, as well as being allowed to keep additional exotics on his property among other things.

As council deliberated, debates were all over the place from the width of the respective property's drive way, to the hours of operation, to the size and type of animals allowed, to approving any type of application at all. Member Karen Thurman even joked about making sure that the human primate not be included. The discussion ran long and was not decided on until after 10pm.

Then end result was 4 vs 1 with Joe Longoria outstanding. Council Member Lance Large was absent.

"Having read all the emails that we received from concerned citizens along with the petitions that were signed, I am very pleased with the outcome of this application. We were able to address all of the concerns of dangerous wild animals such as lions, tigers, wolves, bears, snakes, etc. and limit Mr. Riopelle to four types of animals that he has already been raising for years. Plus, we also addressed issues of traffic and concerns of a 'public zoo' such that was being compared to the Atlanta Zoo," shared Mayor Joe Lockwood." By limiting visitors by appointment only, limited hours, no fees collected, etc. Plus from the property owner's side, we have allowed him to continue operating and using his property as he has legally for the last 14 years. Whether someone agrees or not with this property and use, this is what sets Milton apart from so many other communities that have become nothing more than subdivisions and strip centers."

Council Member Matt Kunz concurred, "I know how hard all of us worked to understand all the details of this issue. The efforts by the city officials and personnel helped Milton achieve the status of "The Best Quality of Life in Georgia", even while the monkeys were already here for 14 years. Now we have a legal process by which to control the situation, whereas before more clarity was needed."

Veteran Council Member Karen Thurman echoed the same."I believe it is important that citizens understand the issue is not whether to allow or not allow the applicant to have the animals. The issue is whether to allow him to continue having them as he did prior to the incorporation of the city of Milton, with the city have no conditions or controls on what was allowed prior, or to grant him a use permit thereby allowing the city to have some controls by adding conditions to the use permit. We chose to have some control over the property by granting a use permit with significant conditions."

Mr. Longoria, the one member voting against, reserved comment with exception stating "Since I was on the side of the minority, I will allow the majority to comment. "

With any type of proposed change in today's Milton Georgia, there were those for and those against.

Amy Stipancich of Greystone Farms was not pleased. "I now lack faith in our local government. The majority of Council Members appeared unprepared, uninformed and unwilling to consider their constituents' concerns. I offered a copy of a petition that had been circulating opposing the use permit/zoo as well as important documents obtained by the state agency overseeing wild animals. Nobody asked to see them. Council Members did not even recognize that their own appointees to the Planning Commission DENIED the use permit request, let alone investigate the reasons why that might have been. I was stunned after the vote to hear Mayor Lockwood reference that before the meeting his wife told him this would be the best compromise. Apparently, his mind was made up prior to stepping into the meeting and he heavily persuaded the Council Members to follow along."

Kay Norvell of Sunnybrook Farms agreed. "It is disheartening to know that a voice of 454 (referring to an online petition against) people is not heard above the wants of 1. The council continued to ask the applicant if he was alright with their proposals. Not once did (they) ask the audience of opposition if their proposals were acceptable even though the Mayor kept calling it a 'wonderful compromise for both sides'. I would like to invite the mayor to visit our neighborhood as we are all trying to enjoy our yards on a lovely summer evening only to be consistently interrupted by the yelling and screaming of monkeys. I only hope a child or an adult is not harmed. It has already happened and was not reported. It will not be on our conscience because we tried to warn you. Joe Longoria tried to tell you because he did his homework but the mayor kept cutting him off thinking he was the wiser of the two. Thank you, Joe, for trying to stand up for the community. We will no longer be silent when noise levels are too loud to bear or there is an escape in our neighborhood. We will hold Milton accountable for this decision. I think we are long past due to get real community representation on the council. I for one am anxiously awaiting upcoming elections."

Ed Parsons of Redd Road looked at things in a different perspective. "I respect that some people are fearful of the unknown and that not everyone supports keeping animals in cages. That is a philosophical point of view that leaves little room for compromise. I think the Council and Mayor did the best they could to set the citizens mind at ease.(Those opposed) got the commitment by the landowner to not have large breed primates on site and they also got an agreement to not have a long list of animals such as lions, tigers, and bears, as well as a long list of other exotics. I am hopeful that the majority will see this as a good compromise and it mitigates a perceived risk. For Dean Riopelle, he has been raising primates for 14+ years and has a track record of extraordinary care, safety, wanted to set up the farm to accommodate visitors. I think the majority of the citizens of Milton will embrace what Dean is doing. For me, it took one visit to his farm to realize that what he has is unique to Milton, is safe, an interesting to experience, and is consistent with our cities rural character."

Mr.Riopelle nor his attorney Don Rolader responded for comment.

One thing is for certain. As the city continues to grow, there will be more debated topics. The question is, can Milton Georgia keep its promise of a "rural" community or will it evolve into something else? Only time will tell.

Ok, let's guess . Did Amy and Kay live here before the zoo was here or not?

To Anonymous,
When the residents of Sunnybrook Farms moved into the area, Riopelle had 12 monkeys. He now has over 100 and will continue to add. Big difference! I'm sure Amy or Kay would gladly sell you their homes so that YOU can enjoy the noise, disease and safety risks and the devaluation of your property. Then again, you probably cannot afford them…

Amy, you are right, I am probably not as "goog" as you and can not afford to buy both houses!

Great idea though? Lets all find someone to buy your's and Kay's homes, then you can use the money to buy Mr. Riopelle's property and be done with this issue.

Then you both can build a home and live happily ever after. Unless, that is, we make up a ridiculous petition that says you want to build a nuclear dump with 2000 low income apartments, that are for terrorists that want to train killers?

Then we can get 500 residents that believe it and don't
Know any different to sign it, and then maybe the city will deny you a permit for a single family home?

Of the three residents adjoining Dean's property, two have lived there over 20 years and one has lived there 12. Dean has been there 14, so two of his neighbors were there LONG before he moved in with his monkeys. When Milton became a city in 2006, Dean had 11 monkeys. He now has nearly 100. If you think that's the same thing, I won't bother arguing with you as there's something basic about the community opposition that you refuse to grasp.

Subdivisions are all about control. Always have been always will be. If I owned land in Milton, I would turn it into another subdivision because anything else will be question beyond comprehension.

Well then Dean and the city need to start telling those 3 neighbors what they can and can't do. Lets get Kay and Amy involved!

Who wants to start the petition?

Hey, believe there are too many horses on that property that a certain lady owns. Hmmm - maybe a petition should be started to correct this bad situation.