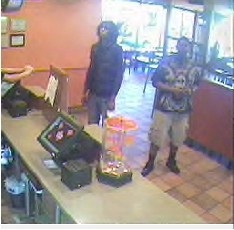 Milton police are seeking the public's help in identifying these men, who are believed to be involved in the shooting death of a Milton resident.

March 21, 2013 MILTON, Ga. – Milton police have revealed photographs of suspects wanted in the March 12 murder of a 19-year-old Avensong resident.

According to police, the victim, Christopher Walker was at at North Point Mall when an altercation occurred between him and the three men police now seek. "We're not sure what happened," said Milton Police Captain John Huey III. "We believe robbery was the motive. They followed him home."

Walker was shot and killed in front of his Milton home. It is believed Walker's killers did not know him prior to attempting to rob him. The three suspects are described from security footage from a restaurant at the mall.

One is described as having dreadlocks that are below the ear but not shoulder length, is approximately 6'2" tall, 170 pounds, slender build, dark skin, in his late teens to early 20's. It appears that he has a small goatee with a strip down the center of his chin. The second man is described as having short hair, is approximately 5'7" to 5'9" tall, 210 pounds, medium build, medium skin, in his late teens to early 20's and wearing skull shirt. The third man is described as approximately 5'7" to 5'9" tall, with short facial hair, is in his 20's and wearing a stripped shirt. "We're still investigating," said Huey. "We're not going to stop until someone is in jail."

A reward of up to$5,000 is offered for information leading to an arrest in the case. Anyone with information is encouraged to call Crime Stoppers Atlanta at 404-577-TIPS (8477) or online at www.crimestoppersatlanta.org.