With Death Of 100 Year Old Farm House, Can Crabapple Still Be Considered "Historic"? 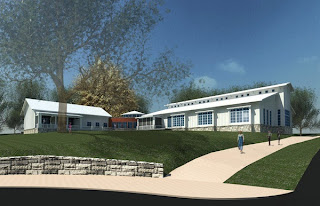 
With construction starting later this year for Milton’s Public Library, a page in time will officially come to a close. Unless someone steps in soon, the Dinsmore house which dates back to between 1910 / 1919, will meet the wrecking ball before year's end. 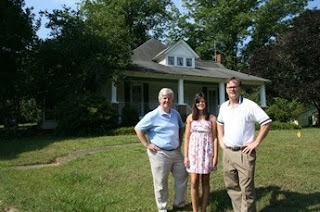 Take your pictures now. The estimated century old Dinsmore house to be demolished. Photo Courtesy Jonathan Copsey; The Milton Herald. Lifelong resident and Chair of the Milton Historic Preservation Commission Travis Allen offered mixed feelings. “While the design certainly makes a statement that this is Milton’s Library, it’s unfortunate that yet another reminder of our past must be torn down.”

Bob Meyers of the Friends of the Milton Library shared that funds are being raised with the hopes of saving one of the barns and relocating it to another part of the property.

With so much development that has hit a once sleepy and truly rural crossroads in recent years, one can only wonder how Crabapple can still be considered “historic.”

Travis, why does Milton need to "make a statement". that is a pathetic reason to destroy historic landmarks and spend tax dollars. Just what we need a library 3 miles down the road from another library - that is under used. More tax dollars waisted and historic preservation out the window.

Milton is not making the statement, rather the Fulton County Library Board is building a library that from the initial design appearances, will be something that reflects how many feel about our community.

Please feel free to e-mail me directly rather than post anonymously in a public forum.

Also, please note that only one building in Milton has officially been declared "historic." I do share your feeling that far too many of our older buildings have been lost and as chair of the Historic Preservation Commission let me assure you that we are doing our best to create a historic district in the Crabapple area, however being designated historic does nothing to prevent future demolition. Unfortunately the law at all levels does not allow for that.

You stated that the Alpharetta library is under used? Did I read that correctly? I'll have you know that you're apparently misinformed in those regards. Try parking there on the day of their next book sale and tell me again that they are under used. And remember that the library at the end of Mayfield will be replaced with a new one at the Alpharetta City Center.

Oh, and these aren't tax dollars, but rather from a bond that was voted on several years ago.