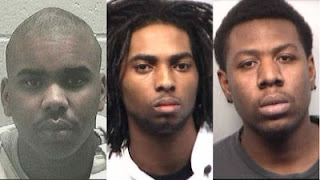 Richard Davidson (left), Matthew Goins (center) and Michael Grant (right) are charged with murder in the death of Chris Walker.

More than two weeks after the shooting, police have arrested three people in the death of a Milton teen. Chris Walker, 19, was gunned down in his driveway March 12 after a trip to the North Point Mall area. On Thursday morning, police told Channel 2’s Mike Petchenik the arrests were made overnight.

Police previously released surveillance video of three men who they believed could be potential suspects. The video showed a man staring at Walker at a Taco Bell restaurant. Officers said Walker’s chain caught his eye, and the group followed him to Milton to rob him. Milton officials said city police, along with Roswell and Alpharetta officers and SWAT team members, arrested the suspects at various locations around north Fulton County.

The suspects have been identified as Matthew Goins, 20, Michael Grant, 23, and Richard Davidson, 20. They are being held in the Fulton County Jail without bond.

Goins' attorney Steve Sadow told Petchenik he has reviewed the prosecution's file, "and even if you give credit to all of the witness' statements, the evidence against Goins demands a legal finding of not guilty."

Milton officials said officers tracked down the suspects based on a car description submitted to the Crimestoppers tip line.