Milton's Charter: What Has Changed 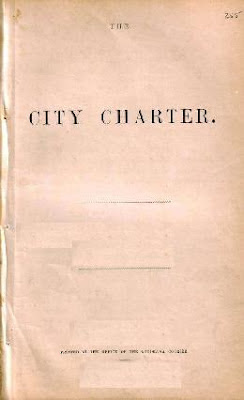 From Appennewspapers.com -
When Jan Jones revised Milton's charter, she included several provisions that clarified or changed portions of the bill approved in July of 2006. The changes will have no fiscal impact on the city and mostly deal with modifying or clarifying certain mayoral powers.

1. Term limits for mayor and council:

Mayor and council are now limited to two four-year terms, not including the terms they are currently serving. Before there were no term limits.Jones said she always intended to include term limits, but the hectic pace of last year's passing prohibited her from introducing it in the bill.

2. Mention removed of insurance, retirement, workers' compensation and other employee benefits for mayor and council:

Though it was removed from the charter, the city may still offer these services.

The charter no longer grants city government the ability to enter into agreements with utility companies regarding franchise fees, an important revenue source for the municipality. However, that does not mean those fees are abolished. Milton, like all cities, may to enter into franchise fee agreements in accordance with state law, so the franchise fees already enacted will stand and $823,000 in current yearly revenue is unaffected.Jones said she wanted the power removed because she believed some members of city government felt obligated to levy the fees, saying they were included in the charter. Also, in the future she doesn't want another city council members "misinterpreting" franchise fee wording in the charter.

4. Powers and duties of the mayor:

A. Council must now confirm all mayoral appointments for council committees to oversee and report on various city departments. Before, council did not approve the appointments.

B. If the mayor's nominations for important city positions, i.e., city manager, city attorney, etc. are rejected by council or not nominated by the mayor, council may offer nominations. Before, the outcome for council rejection was not clear.

C. Removal of mayor's executive aide position (also removed from other areas of the charter). The mayor had indicated he was not going to fill that position.

D. City manager: The mayor's suggestion for the city manager's initial compensation must now be approved by city council.

E. Boards and commissions: All boards and commissions must be seven members, nominated by the City Council and the mayor. Each appointment must be from the council member's geographic district, but the mayor's nominee may be from anywhere in the city limits. Mayor and City Council had passed their own ordinance with the same wording, and now the charter is in line.
Posted by Accessmilton Admin at Friday, May 25, 2007