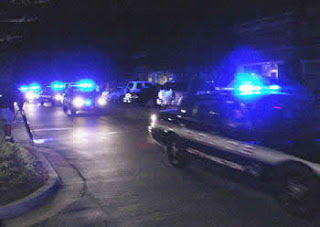 With blue lights flashing and a celebratory blast of sirens, 14 patrol cars rolled out of the City Hall parking lot at midnight May 1, ushering in a new era of law enforcement for the City of Milton.
Five minutes after the city police operations deployed, a Fulton County Police Department major pulled their units from the city roads with a radio notification that Milton police had officially assumed their duties. Public Safety Director Chris Lagerbloom went on the air to thank Fulton PD for its service and the Fulton major wished Lagerbloom and the officers well.
“It was a nice exchange,” Lagerbloom said.
At 12:10 a.m., the first call was radioed out through Fulton County dispatch – an alarm report at the Crabapple Tea Room at 800 Mid Broadwell Road. The call was cancelled before the responding officer could arrive.At 1 a.m., police had their first case – a single-vehicle rollover accident at Birmingham Highway and Lexington Plantation Way. A Comcast service truck servicing a line with its boom arm extended had toppled over.
In all, officers made 20 traffic stops during the inaugural shift – more than Lagerbloom expects will be usual for a Monday night shift, due to the numerous off-duty officers who were on the roads. Only two stops resulted in tickets, one for an expired tag and the other for illegally passing a school bus.
The excitement surrounding the deployment of the city’s police operations was clearly evident, starting with the fact that while a normal night shift consists of a lieutenant and three patrol officers, 14 of the force’s 21 officers were on hand for the roll out. The members not present were those slated to work the day shift, which started at 5 a.m. Lagerbloom instructed them to stay home to ensure they would be fresh for the first full 12-hour shift.
Joining in the historic occasion were Mayor Joe Lockwood and City Council members, several city staff members led by City Manager Aaron Bovos, along with representatives of the Alpharetta Police Department, Milton’s neighboring jurisdiction.
“I enjoyed being a part of it; there was excitement in the air,” Council Member Karen Thurman said. “The police are one of the most tangible resources a city has and now it seems so real.”
“This has been a day we’ve been waiting for,” added Council Member Rick Mohrig. “It is exciting to see the officers and their enthusiasm and we give them our support as they begin to service to our citizens. This has been a long time coming and we are thrilled it has arrived.”
Officers began arriving shortly before 9 p.m., two hours before roll call and three before the start of the shift, wanting to take it all in. They found dinner waiting courtesy of Judy Jay of Great American Specialty Advertising, the firm that provided badges and patches for both police and fire operations (which launches May 18).
At 11 p.m., the officers assembled in council chambers for the first roll call where shift Lt. Matt Marietta reviewed several items and Lagerbloom addressed his force.“It seemed like this day would never get here but now it’s about to be reality,” the director said. “We have a tremendous responsibility but if there is one thing I’m sure of, it’s that nothing will occur tonight or going forward that we won’t be able to handle. And if there is one thing I would wish for this agency, it’s a long history of safe operation.”
From there the officers moved to the parking lot for a pre-deployment check of their vehicles and equipment. The 2007 Ford Crown Victoria Police Interceptors feature the latest technology, including laptop computers that not only allow officers to complete paperwork on scene but also feature global positioning system (GPS) capabilities to help them find their way around city roads and streets.
At the stroke of midnight, Lagerbloom got on his vehicle’s public address system and gave the order to roll, sending the patrol off into the night.
Posted by Accessmilton Admin at Wednesday, May 02, 2007