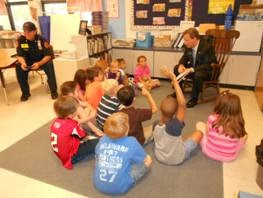 “Investing in the education of our youth is imperative to securing a workforce that is able to meet the ever-changing demands of today’s innovative society,” said Sen. Albers. “Through both community involvement and parental engagement, especially during the early developmental years, we are helping our children become equipped with the tools they need to succeed in the years ahead.”

Sen. Albers also met with members of the student council and fourth grade classes at Roswell North Elementary School to discuss the governmental process. While there, Sen. Albers provided a more in-depth view of Georgia government and explained our responsibilities as citizens.

“Roswell North’s Fourth Graders would like to express our thanks to Sen. John Albers for teaching us how our government is structured, and answering our questions,” said Cindy Fields, Fourth Grade Teacher at Roswell North Elementary School .

As part of Georgia ’s statewide social studies curriculum, fourth graders are required to learn about the various branches of government, including their structure and general responsibilities.

“It was my honor to talk about my service as a state senator and the unique role that government plays in the lives of everyday citizens,” said Sen. Albers. “Every time I have the opportunity to meet with students, I am always inspired by their quest to learn and desire to apply the knowledge they’ve gained while in the classroom. By offering students with a variety of learning environments, such as speakers or other hands-on training, it only further accentuates what they’re already learning in their textbooks.”

Sen. Albers’ sons, Will and Ryan, both receive their education at North Fulton County Schools.

Sen. John Albers represents the 56th Senate District which includes portions of North Fulton County . He may be reached at his office at 404.463.8055 or by email at john.albers@senate.ga.gov.