Milton honors those who serve. 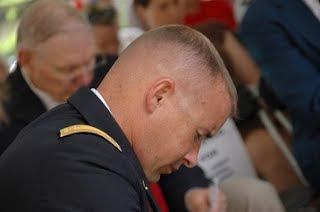 A roll call of local veterans who are no longer among the living was called out.


The event was the culmination of Milton's remembrance of those who have fought and died who lived in city. Every year, Milton Council Member Bill Lusk creates and stands hundreds of white, wooden crosses along Deerfield Parkway, one for each fallen soldier.

The city held an essay contest as part of the ceremony. Zach Ellison, a sixth grader at Hopewell Middle School, was the winner. With an essay titled “Honoring those who will never be forgotten,” Ellison wrote, “These men and women should be remembered and honored for the sacrifices they make and the work they do each day to keep our country safe. The members of our military make the choice to join and defend our country out of their love for the United States of America.
“This is why it is so important to honor those who will never be forgotten.”

"Honoring Those Who Will Never Be Forgotten"

Memorial Day is a holiday for remembrance of those who serve or have served our nation, especially those who lost their lives. These men and women should be remembered and honored for the sacrifices they make and the work they do each day to keep our country safe. The members of our military make the choice to join and defend our country out of their love for the United States of America.

The volunteers that serve in the U.S. military make many sacrifices for people they have never even met. They leave their families behind, whether it is spouses and children or brothers, sisters, and parents. They miss holidays, birthdays, and other special occasions in order to serve our country. They stay away for time periods as short as weeks or months, or as long as years. They miss special events, children being born, and children growing up, all for the benefit of others and out of choice. Some soldiers have wives who will give birth sometime soon. The selfless members of our military know they will have to make all these sacrifices and still choose to sign up for life in the military.

The soldiers do very hard and painful work to keep U.S. citizens safe. They go out into lands with harsh climates or places they’ve never seen before. They may have to endure extreme heat or extreme cold. They fight for their lives in foreign lands to protect everyone in the U.S. from being hurt. Many have lost their lives from non-combat related reasons. Some don’t even fall from enemy fire. Sometimes they even sacrifice themselves and lose their lives so that people in the U.S. don’t lose theirs. This difficult and often dangerous work does not stop these people from choosing this career.

What is amazing, though, is that these people aren’t even forced to serve in the military. All the people who serve do it voluntarily. So this means that people put their lives on the line frequently by choice. They also make all the sacrifices by choice. They go through all the hard, harsh work by choice. This means that the volunteers who choose to serve love the United States of America so much that they put their lives on the line for it.

During Memorial Day, living and dead servicemen or women are honored and remembered in some cities like Milton, Georgia. They sometimes have decorations to honor and remember those who fell in the military in that town. In Milton, the people set up crosses alongside a road to remember and honor the military servicemen and women who were former residents. These actions honor and help people remember the valiant soldiers who lost their lives defending our country.

It is important to remember and honor those who lost their lives defending our country. These people made the ultimate sacrifice to defend our country for people they don’t even know. They went out and did hard, heavy work for the people back in America. They put their lives on the line for complete stranger. What’s more, they did all of this voluntarily. This is why it is so important to honor those who will never be forgotten.

Posted by Accessmilton Admin at Wednesday, May 30, 2012