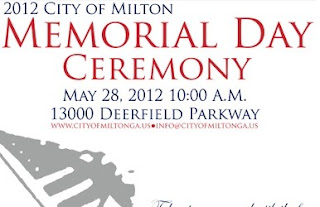 Honoring those who will never be forgotten: It is a pledge to reflect upon the sacrifices made by our brave servicemen and women who served their country valiantly throughout this nation’s history.

It is also the theme of the City of Milton’s fifth annual Memorial Day Ceremony, scheduled for Monday, May 28 at 10 a.m. at Milton City Hall, 13000 Deerfield Parkway Suite 107. Click here for directions.

In addition to his military career, Butterworth recently completed his service as a state senator for the 50th district. While serving in the state Senate, Butterworth served as chairman of the Higher Education Committee and vice chairman of the Banking and Financial Institutions Committee. He was also a member of the Appropriations and Natural Resources and Environment committees and served in an ex-officio capacity on the Economic Development and State and Local Government Operations committees.

Prior to his election to the state Senate, Butterworth served as chairman of the Habersham County Board of Commissioners.

The ceremony will conclude with a roll call of local veterans who have made the ultimate sacrifice for their country. Their friends and families are then invited to reflect upon the markers created to remember their legacy and placed along Deerfield Parkway by Councilman Bill Lusk.

Please start your Memorial Day by joining the City of Milton in remembering those who have served the cause of freedom to their last breath.